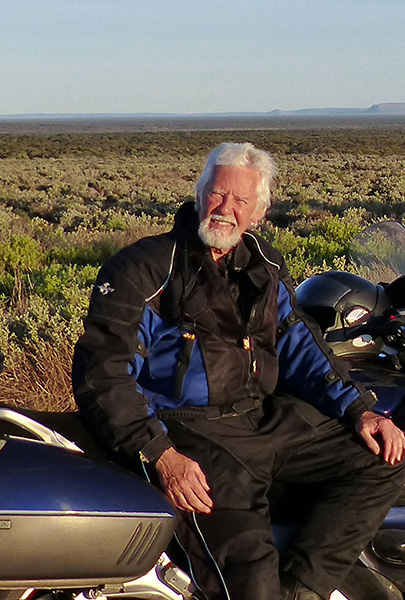 A brief biography and background details

Travel, writing, and photography have been my passions since the 1970s when I boarded a train at a wet and windswept station in Blackpool, England, bound for a new life in sunny Perth, Australia. I was 23 and I’ve been travelling ever since.

I’ve bumped across the Andes in ramshackle buses, got lost in the African scrub, rode a Harley over the snowbound Rocky Mountains, and been scared to death clinging to a yardarm aboard a square rigger out on the Indian Ocean.

Initially, work as an engineer took me to the remote Australian outback to establish mines. Then I built railways in Hong Kong and later managed oil installations in the harsh deserts of the Middle East. My immersion in exotic cultures and experience of foreign lifestyles and political regimes stimulated an interest in how history, religion, and politics shape societies.

My first book grew out of a 5,000-kilometre motorcycle journey across Australia. On my return, friends asked for a copy of my travel journal, so I started scribbling. The result was Australia: The Long Ride Across, published in 2010.

By then I had fallen in love with writing. I undertook courses on creative nonfiction and studied the styles of New Journalism. I began writing articles and essays while avidly reading Jack Kerouac, John Steinbeck, Paul Theroux, Bill Bryson, and Hunter S. Thompson.

My latest book, “Three Harleys, Three Aussies, One American Dream – A 5,000mile Motorcycle Adventure around the USA”, puts the reader astride a Harley-Davidson on a rollicking road trip around the USA in search of the real America. . . . read more

In my writing I aim to entertain the reader by capturing the atmosphere of intriguing places, the charm of the fascinating characters I meet, and the sheer excitement of being on the move. Yet, inevitably, the many unforeseen disasters and farcical situations that seem to infest my wanderings also creep onto the page.