It is a quiet Sunday morning when I turn off Highway 61 at a crossroads on the edge of town to cruise into Clarksdale. I have travelled hundreds of miles retracing the roots of popular music to this Mississippi town that claims to be the birthplace of modern blues music. Driving past trailer parks, rundown houses, and abandoned shops, I fear I have reached a dead end, just another declining small southern town, where the music and musicians seem to have moved on.

Clarksdale holds a special place on this evolving music route. It is where metaphysical intervention transformed Robert Leroy Johnson, who was just another guitar player at that time, into a blues virtuoso overnight. This legend tells of a drunk and depressed Johnson waiting to hitch a ride under a full August moon at lonely crossroads somewhere near Clarksdale. At midnight out of the shadows, steps a mysterious, tall, black man accompanied by a crazed, howling dog. The man offers to make Johnson the ‘King of the Delta Blues’ and gift him all the whiskey and women he could want in exchange for his soul. Johnson embraces the offer and is immediately possessed by the long, low, soulful moan of the crazed hound. Miraculously, he acquires exceptional ability and a unique playing style that propels him to become an outstanding performer and prolific songwriter. Johnson pioneered an innovative style of ‘bending notes’ (stretching strings to vary pitch and tone of notes) to replicate subtle inflections of the human voice, or indeed the long, low, soulful moan of a crazed hound. However, there was a toll to pay, and at the age of 27 Johnson died in a dancehall in Greenwood, Mississippi after drinking a bottle of whiskey allegedly poisoned by a jealous husband.

This Sunday morning there are no signs of successors to Robert Johnson on Clarksdale’s deserted streets: the 1918 Paramount Theatre appears abandoned, the famous Ground Zero blues club is closed, as is the Delta Blues Museum. So aimlessly I park my car to peer into the windows of the Rock and Blues Museum displaying a fascinating private collection of music memorabilia.

The faint sound of a soulful guitar carries in the still air. Is it from a concealed shopfront speaker? No. I stroll around a corner and on down half a block to where a chalkboard sign outside the Bluesberry Café promotes “Blues & Breakfast – with Lightnin’ Malcolm.” Spirits lifting, I stride in through the swing doors. 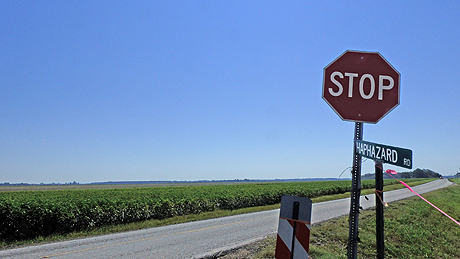 Inside, in a gloomy long narrow room, two rows of tables stretch back to a serving hatch into a kitchen. In a corner near the door a battered upright piano is wedged beside a small stage where abandoned drums are flanked by speakers, mic stands, and festoons of cables. Music memorabilia cover the walls; tour posters, a couple of album covers, faded signed photographs of performers, a life-sized cardboard cut-out sax player, two stuffed monkeys, and an old punch-card time-clock. Untidy, a bit shabby, this venue has the appearance of a lived-in workspace for a journeyman musician, not a platform for a glamour seeking wann’a’be.

A little lady with a big smile greets me, leads me to a table, then presents a menu. She is Carol Crivaro, co-owner with husband Arthur, both blues devotees who relocated to Clarksdale from Florida. She jokes with other patrons on the way through; it seems some are regulars, while others have returned for more music after an outstanding concert last night. Customers are mostly middle-aged blues fans judging by their T shirts and cool black clothes, comfortably at home in this sanctuary for authentic, down-home music.

On the stage Lightnin’ Malcolm is punching out a pulsing rhythm and blues number. He is a big man, as solid as the beat he thumps out with his feet on bass and snare kick drums. His guitar technique blends acoustic finger-picking with amplified bent notes from modern electric blues. For this number he’s wringing a lilting, crying sound from his guitar by sliding a neck cut from a glass bottle along the fretboard: a perfect accompaniment for his deep, gravelly, voice. Interspersing a kick symbol by his side and a harmonica on a brace around his neck, Lightnin’ is a veritable one-man-band who fills the room with music. 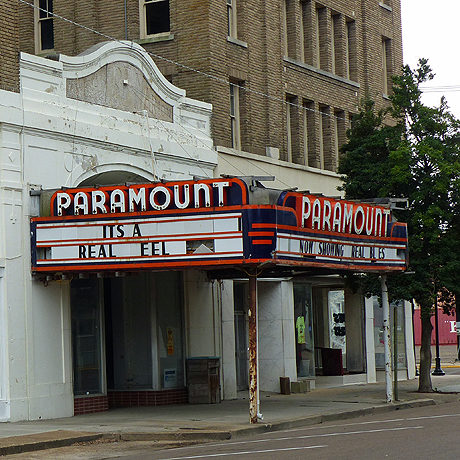 The audience is responding to this masterful performance, getting into the groove, shouting encouragement, and clapping a virtuoso guitar solo that closes the set. Lightnin’ nods, mops his brow, and steps down from the stage to joins a table of what could be fellow musicians for a quenching beer.

Suddenly aware of the sweet smell of waffles wafting from the kitchen I order the house speciality: Blueberry Pancakes. What a feast; a stack of three, thick, doughy pancakes scattered with plump berries bursting with juice, all smothered in whipped fresh cream. Complementing Carol on a delicious breakfast that will satisfy me till sunset, she insists praise is due to husband Art, a master pastry chef who’s working away in the kitchen.

During the break I chat with Lightnin’ who is casual and unassuming. I ask how he achieves such clear, vibrato notes without the aid of a plectrum. He smiles, turning over his hand to reveal raised callouses on the tips of his fingers as hard as steel.

Back on stage Lightnin’ renders a soulful lament about love gone wrong in the style of John Lee Hooker, then kicks up the tempo with a self-composition called “Done Wrong” peppered with explosive guitar riffs. The audience is energised by this lively number, one couple already out of their seats unable to resist an urge to dance. Art emerges from the kitchen, towel over his shoulder, to tap out rhythm on bongo drums. Others are swept up, a guy from Lightnin’s table drags over a set of congas to beat out a syncopated back beat. Carol puts down her tray to join in with a backing chorus. The whole Bluesberry Café is bouncing. It is eleven o’ clock on a Sunday morning, but this party is rocking like it was eleven o’ clock Saturday night. 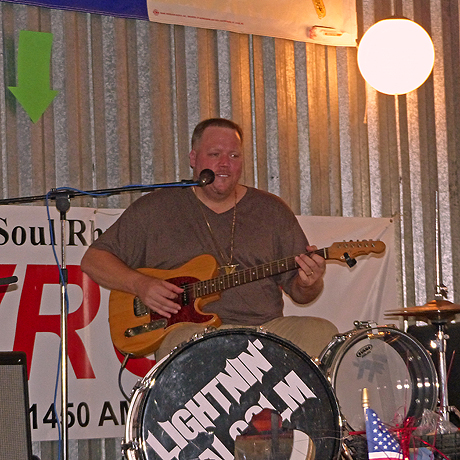 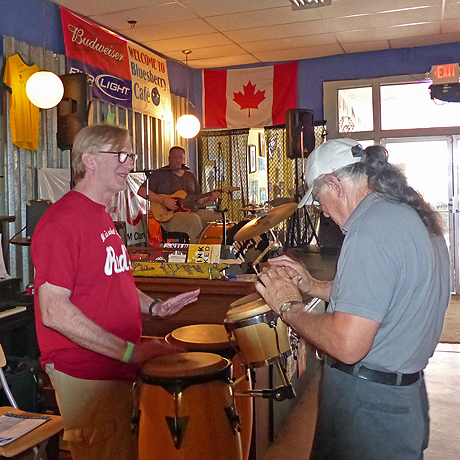 Coming to a last number, Lightnin’ pauses, strumming a few chords while he catches his breath. Then he recalls playing guitar in a Church of God in Christ as a teenager. Fondly remembering how back then singing Pentecostal ‘Shout Music’ on Sunday morning would dissolve troubles accumulated during the week.

“Well” he says, “It’s Sunday morning, so let’s work up that spirit” launching into a revivalist spiritual number called “Stomp Yo Feet, Clap Yo Hands.”

No hesitation, no need of encouragement, everyone is swept up in the spirit and sings along. We may be off-key but who cares, our Sunday morning hymn is a joyful celebration of hot gospel and blues boogie that shakes the café’s windows and echoes down the deserted streets. A ruckus so loud I wonder if, back at those crossroads on the edge of town, the lost soul of Robert Johnson has been roused to join in and bend a few notes.

Stompin’, clappin’, and singin’ along with Lighnin’ I am relieved to find Clarksdale is not a dead end after all, but a vibrant centre for modern blues music, and the Bluesberry Cafe is certainly the berry on top of the cake!

You too can enjoy authentic blues music, and delicious pancake at the Bluesberry Café, 235 Yazoo Ave, Clarksdale, MS 38614, USA, Tel. +1 662-627-7008. While you’re in town also visit the Ground Zero Blues Club, Delta Blues Museum, and Rock and Blues Museum, all worth a visit. Then wander along the Mississippi Blues Trail following the roadside markers on highway 61. For a map and information visit: www.msbluestrail.org 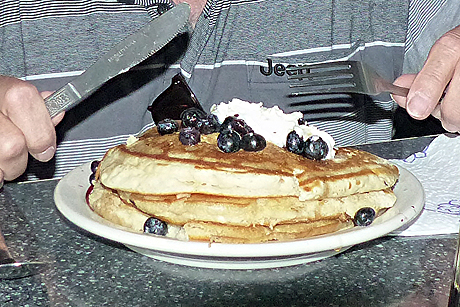