Two Memphis police cars block entry to Beale Street. They’re not cordoning off a crime scene: they’re getting ready for a riot-- a riotous street party. . .

Two Memphis police cars block entry to Beale Street. They’re not cordoning off a crime scene: they’re getting ready for a riot. A riotous street party, as tonight the good times are going to roll celebrating B. B. King’s birthday!

Three cops, hatless in short sleeves this warm September night, loll against their patrol cars watching the warm-up act. A troupe of athletic black men stripped to their waists showing off rippled ‘six-pack’ stomachs are performing acrobatics for tips. A lithe twenty year old sprints down Beale Street like Ben Johnson, to throw himself into the air, and somersaulting with such explosive energy he draws gasps from passers-by. His buddy follows hurtling through six hand springs. Then somebody’s kid brother, no more than four feet tall, launches into a succession of cartwheels. As the crowd cheers, the troupe leader sweeps round spectators rattling a galvanized bucket collecting notes and small change.

Along Beale Street the sweet smell of hickory smoke wafts from a ribs restaurant kitchen; bar staff are arranging tables on the sidewalk; and a roadie is bumping a big, black amplifier through a darkened blues club doorway. Everyone is getting ready for a busy night. 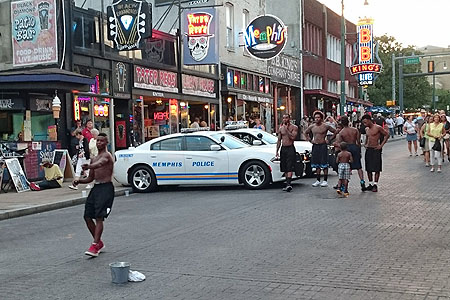 Memphis is a Mecca for musicians and the clubs and bars of Beale Street are melting pots where fusions of music genres frequently boil over. In the 1930’s wandering songsters hitching rides up Highway 61 from Mississippi Delta cotton fields found new audiences in black urban neighbourhoods around Memphis. Their simple, solo acoustic guitar blues songs played on plantations and in church halls morphed into slick shows by professional groups featuring electric guitar leads backed by drums, bass, and a horns section. The music got louder, rhythm stronger, and performances so energetic that listeners just had to jump up and dance. This lively Rhythm and Blues music popularized in the 1940’s continued to evolve, colliding with Country and Western in the fifties, then breaking out as Rock n’ Roll that overran the world in the sixties.

At the forefront of this phenomenon was Riley B. King, ‘The Blues Boy of Beale Street’, better known as B. B. King. A guitar virtuoso, chart-topping star, and recipient of many awards B. B. King is also a recognised role model and a racial ambassador whose universally popular music broke down segregation bringing black and white communities closer together.

Born on a Berclair plantation in 1925 this son of a sharecropper started singing in church as a child. At 12 he bought a $15 guitar, first performed professionally as a teenager, and got his big break as a disc jockey, becoming ‘The Blues Boy of Beale Street’ who also sang advertising jingles on Memphis’s WDIA radio. Within a few years B. B. won a recording contract. He started touring performing up to 300 shows a year, an exhausting schedule he continued well into his 70’s.

Chart success funded foundation of B. B. King’s own record label where he became a producer and mentor to many upcoming stars. Later, collaboration with leading country, rock and pop artists spread his fame and his beloved blues music, world-wide. He continued performing right up to his death in 2015 aged 90. Mr. B. B. King has been inducted into the Blues Hall of Fame, the Rock and Roll Hall of Fame, and awarded the prestigious Polar Music Prize for the ‘advancement of music’. 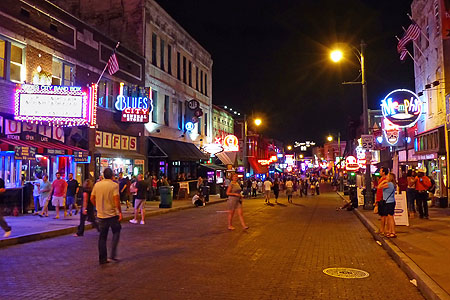 Back on Beale Street tonight, the acrobats smile and wave clutching a bucket full of cash as they vacate the road. A gang of college students quickly step in to claim their pitch, trying to perform an impromptu line dance that quickly collapses into trips, stumbles and fits of giggles.

Neon signs burn more brightly against a darkening sky. A tortured guitar riff wails from an open bar-room window like a siren’s song enticing blues fans in. On a stage in a café courtyard wedged up against a fire-escape stair a scruffy bunch of musicians are pounding out an ear splitting rendition of Hoochie Coochie Man to an audience of die-hard blues fans slumped in plastic chairs swigging draft beer or bourbon & Coke. Closing the set their leader thanks the deafened audience in a broad English accent. This Brit’ muso’ is a living testament to how far enthusiasm for American blues music has travelled.

On the corner of Beale and 2nd Street stands B. B. King’s blues club, a square two storey brick building with a flashing sign topped by a golden crown. Patrons line up at the door for tonight’s sell out-show. Inside, a square bar is backed up against a wall and small circular tables and chairs are set-out cabaret style on three tiers around a small dance floor, Furnishings are minimal, a few posters adorn the black painted walls, the hard floor is uncarpeted, and hand-rails look like welded scaffolding poles. Customers come here to experience the great music, not soak up the stark ambience. 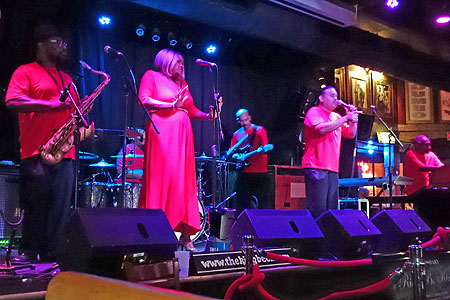 And the music is as raw and unembellished as the décor. On a raised stage the King Bees, B. B. King’s long term backing group have patrons bopping along to his early hit Every Day I have the Blues. Getting into a groove other hits follow encouraged on by an appreciative audience. Slowing the pace, they wind down their set crooning one of B. B.’s favourite ballads; At Last.

Lights come up and a memorial bench is carried to the stage. It is inscribed ‘The Legendary Riley B. King, ’'The Thrill is Gone 16 September 1925 – 4 March 2015’. It bears a smiling photograph of B. B. with his beloved guitar Lucile.

King family members gather around; two sons and three daughters from an extended family of 15 children, reputably from 15 different mothers. Daughter Barbara thanks everyone for coming and holding back tears shares stories of Riley King the father, the family man, and the benefactor of good causes. Barbara concludes by inviting everyone to “come sit a while with Riley” on the bench when it is installed outside on Beale Street.

Son Willie, who is also blessed with a fine voice, speaks like an evangelical pastor to raise spirits, preach redemption, and gives thanks for an inspirational life that brought such joy to so many people. On his request, the whole audience stands with heads bowed for a moment of silent prayer and reflection. Then the King Bees ease into a sincere, heartfelt rendition of The Thrill is Gone: tears fall and sobs are stifled as a palpable feeling of loss pervades the room.

Suddenly a familiar horn blast shatters the sombre mood and thumping piano intro’ heralds B. B. King’s signature song Let the Good Times Roll. Emerging from grief the audience tentatively starts to swing and clap. Tears cease and smiles grow as they get the message in the music. By the second verse the clapping is bolder, the crowd has found its voice, and few couples are up dancing. The celebration of B. B. King’s birthday begins in full swing rocking on all night and into the morning.

B. B. King’s legend lives on. That night on Beale Street you could almost hear his guitar Lucile ringing out those bent blues notes, picture that big, genial smile, and conjure up the sound of that deep Mississippi baritone voice. He was with us. Mr. Riley B. King will always be with us when they play Let the Good Times Roll.

You too can visit Memphis’s vibrant Beale Street and sit a while on the bench with B. B. King. To plan a truly memorable night out visit these websites: https://www.bbkings.com/memphis https://www.memphistravel.com/trip-ideas/beale-street 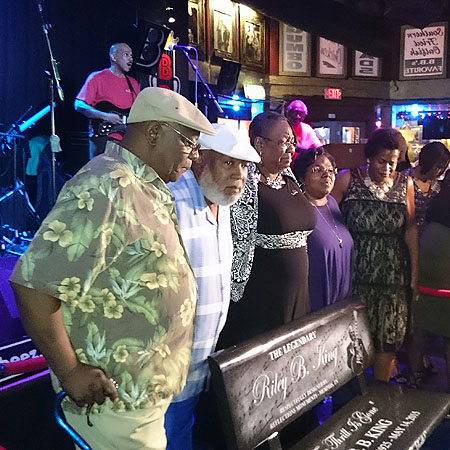