Get lost in the lanes of an ancient citadel to experience sights, sounds, and tastes from another era . . .

I march up la Rambla, a busy boulevard of outdoor cafes, flower kiosks, and bird vendors’ stalls that climbs from the statue of Christopher Columbus at Port Vell to Placa Catalunya, the busy roundabout that Barcelona revolves around. I study my tattered map searching for an entrance to the ancient heart of this vibrant city. Crossing the road I cautiously squeeze between yellow taxis and white delivery vans gridlocked in lines of traffic, warily watching for speeding scooters that weave through the gaps scattering gawking tourists. Then, I turn out of the bright August sunlight to walk down a shady alleyway cutting between tall stone buildings and I find myself in another era.

It is cooler and quieter in the narrow alleyway that was constructed centuries ago just wide enough to allow two laden donkeys to pass. A labyrinth of lanes lead on curving and crisscrossing in a chaotic maze that confused the Arab raiding parties who persistently stormed up from the shoreline back then. As if entering a time-tunnel, each onward step takes me back into The Gothic Quarter, the medieval citadel of Barcelona that thrived in the 1400’s when Wilfred the Hairy wore the Crown of Aragon and ruled Catalonia, Spain, and lands beyond. 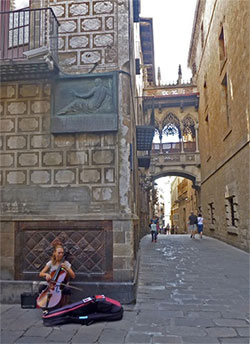 I pause at a water trough decorated with hand-painted tiles depicting the walls of the old citadel. Then I stride on; past a hatters displaying stylish straw Panama’s and brushed silk Fedoras, past a pop art gallery hung with Picasso prints, and under a charming shrine to The Virgin chiselled into a stone wall. I peer into an upholster’s workshop cluttered with chairs smelling of sawdust and varnish, and I peep behind carved wooden doors into a secluded garden blooming with vivid purple Bougainvillea. I gaze at the imposing facade of La Marce Basillica, and wonder at the fabulously ornate Carrier del Bisbe bridge that spans a narrow lane. Then I stop in a small piazza shaded by a Plane tree to realize that, like would be Arab raiders I am completely lost.
Seeking a seat and a cool drink, I notice a simple café whose unadorned windows display desserts and pastries from a bygone era. I swing open the door to be greeted by the aroma of freshly brewed coffee and the distinctive sounds of the Catalan dialect. The décor inside is equally plain, even austere by modern standards; an earthenware tiled floor, yellow painted plaster walls, and orderly rows of marble topped tables surrounded by high backed wooden chairs. None of the comfortable coziness of a Starbucks nor the stylish sterility of a MacCafe, here even the expresso machine looks archaic and industrial.

Strangely, in pride of place over the industrial expresso machine,is a painting of two cows. Clearly, this place is an authentic Granja, a dairy café or milk bar frozen in time as it was when it first opened in the 1940s, a time when Franco ruled Spain and the Catalan language was brutally suppressed. Granja, that literally means farm or barn, also refers to a small family run café specializing in milk puddings, chocolate dips and imported coffees. Confirming this lineage, the building housing Granja La Palleresa was actually a dairy for decades before it was converted to a café.
I take a seat, a smartly dressed waiter in a starched white shirt, pressed black pants, wearing a black bow-tie presents a typed menu card. Even with my limited Spanish, I can count twelve dishes with cream, eight with chocolate, and four milk drinks, including Double Milk and Curd. I shun the Churros, extruded doughnut strips to be dipped in sickly sweet melted chocolate to try something more adventurous – a Pedralbes an Nata, the blancmange mousse surrounded by cream I saw in the window display. Pedralbes in Catalan means ‘white stones’ and is the name of an affluent district of Barcelona. The waiter returns to take my order, he respectfully corrects my pronunciation, then carefully notes my selection on little duplicate pad. He steps smartly to the bar to present the top slip to a Barista, with similar greying hair and dark soulful eyes who could be his brother. 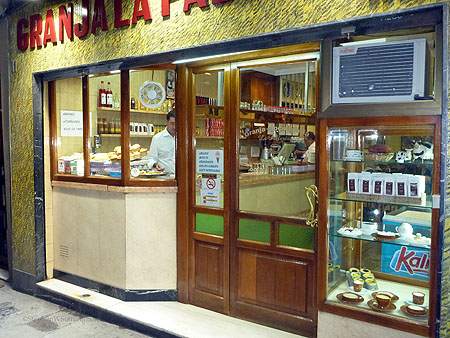 The old coffee boiler belches and spits out a stream of inky fluid into a tiny cup momentarily drowning out the soft buzz of conversation. Two women at the next table pause, then resume gossiping. Local girls sitting under a picture of a farm continue their urgent discussion, from their anguished expressions the topic is probably boyfriend trouble. A couple of older ladies are chatting at an adjacent table, tastefully dressed in a smart linen two piece and a cotton floral print dress, both timeless classics fashioned back in the Fifties. Affluence is evident in their quality court shoes and leather designer handbags, all choice examples of the stylish accessories for which Spanish craftsmen are deservedly famous. Towards the door an older man sits alone nursing that tiny cup of inky fluid belched out by the old coffee boiler. He ignores the newspaper spread before him and gazes wistfully out of the window.
Some customers call in for take-outs but most choose a seat and tarry; lingering to savour the serenity of this tranquil sanctuary away from the impatient traffic, swarming tourists, and the sticky summer heat.

My Pedralbes an Nata arrives, shaped suggestively like a woman’s breast surrounded by whipped cream. The solemn waiter places it down carefully yet it wobbles seductively: do I detect a wry smile under his moustache? Whatever, I spoon up the tasty treat its smooth texture carries subtle flavours of caramel laced with a hint of coffee – delicious! The cream is tasty too; fresh, hand whipped, and scooped from a bowl not squirted from some stale aerosol can. Warming to the delights on offer I order an Ensqunada a Crossan, a light pastry tasting of almonds and dusted with sweet icing sugar to accompany a richly aromatic Columbian coffee. 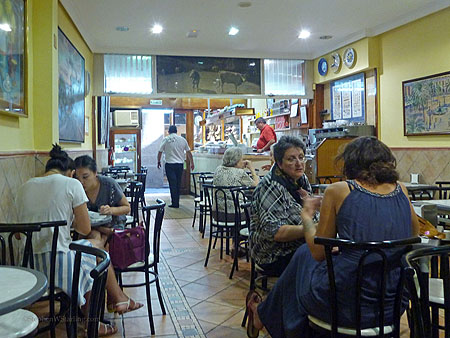 I long to linger like the other patrons whiling away a slow afternoon, but I have to venture out to find Rent-A-Tiger to collect the Triumph Tiger XC800 motorcycle I have hired to explore the twisty tracks that wind over the Pyrenees. I retrace my steps along the alleyways and after a few mis-turns find my way back towards the bright sunshine and bustling streets of modern Barcelona.
I pause once again beside the water trough tempted by the sparkling clear water splashing onto those decorated tiles. Yet, I am wary of an old legend that states; if you drink at this trough, a spell will hold you captive, compelling you to return to Catalonia. Undeterred, I stoop down to scoop up the cool water hoping the legend is true.

Next time you are in Barcelona do visit Granja La Pallaresa on Carrier de Petritxol, 11, Barri Gotic, 08002 Barcelona, Spain. If you get lost, like me, call them on +34 933 022 036. For more information on the Gothic Quarter visit: 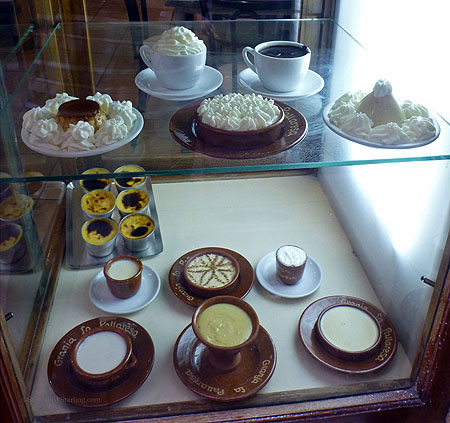