The monuments and the myths of Hearst Castle are a fitting legacy for one of the most outstanding and controversial characters of the twentieth century, William Randolph Hearst.

The tour bus trundles along a twisty road over rolling hills scorched brown by the California sun. Windows rattle as it climbs towards a clump of oak trees surrounding a cluster of Spanish-style buildings on a hilltop. Lush gardens come into view, sweeping up to an imposing stone mansion crowned by two tall towers that shine starkly white against a cloudless blue sky.

I step down from the bus to climb a flight of terra-cotta tiled stairs to a marble paved terrace, where sparkling water cascades from a circular stone fountain adorned with nymphs and cherubs. Clipped boxwood hedges border colourful flower beds that arc around the curve of the hill. A tour guide points out statues set among the shrubbery — classical Greek, sensual Renaissance, and exotic Egyptian. Impressive, although when you turn around, it is the view that is most striking. A spectacular sweep of azure ocean rolls in to a rugged coastline that slopes up across sunburnt grasslands to the dense green redwood forests of San Simeon State Park.

George Hearst, an owner of gold and silver mines, bought this 250,000-acre Rancho Piedra Blanca property with its fourteen miles of privately owned coastline in 1865. He built a secluded Victorian villa where his family often holidayed. His son, William Randolph Hearst, known as WR, spent happy boyhood days trekking along creeks and camping on hills that overlooked the ocean. When WR inherited the property in 1919, he decided to build a new home for his wife, Millicent Willson, and their five sons. In initial discussions with the architect, WR is reported to have said, “I would like to build something upon the hill at San Simeon. I get tired of going up there and camping in tents. I’m getting a little too old for that. I’d like to get something that would be a little more comfortable.” 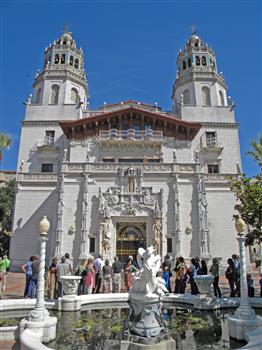 The enormity of the estate becomes apparent as I continue to climb stairs and stroll on through lush gardens to reach the Neptune Pool. This outdoor swimming pool is an inviting circle of sparkling water flanked by shady colonnades set into the hillside. Statues of swans stand at the water’s edge marking the four points of the compass quadrants. Below the water dark tiles trace a geometric pattern on a blue bottom, and stepladders fashioned from solid marble sink below the surface, tempting a swimmer to take a dip.

The centerpiece of the colonnade is a Roman temple façade of six marble pillars twenty feet tall supporting a capstone carved with classical characters. This is not a re-creation but an authentic ancient temple, dismantled stone-by-stone in Europe, and shipped halfway across the world to be reassembled on this American hillside. A special hillside, one WR called “La Cuesta Encantada” — “The Enchanted Slope.”

The montage of mismatches continues as I step into the cool gloom of a grand banqueting hall where a high carved wood panel ceiling is supported by bare sandstone walls hung with dark tapestries; drab flags fly listlessly from ornamental brass poles and in between, alabaster reliefs depict classical Greek scenes. To one side a solid wooden table large enough to seat thirty is set with gleaming cutlery lit by solid silver candlesticks three feet high, while scattered around is an eclectic collection of statues, paintings, and stuffed animals. This cavernous chamber has the appearance of a Scottish castle and the atmosphere of a horror movie. 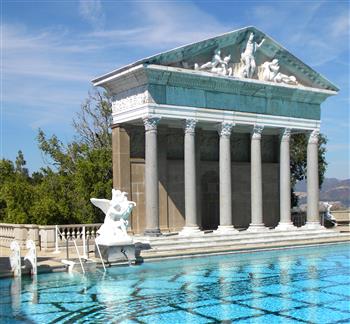 Footfalls on stone floors echo down a rabbit warren of corridors as I follow the tour guide past an odd collection of artifacts arranged like the archives of a museum. I wander wide-eyed through a succession of rooms: a billiard room with three green-beige tables aligned on a parquet floor below gold chandeliers as if it were a London gentlemen’s club, a private cinema lined with shelves of books where WR would screen films from his own Cosmopolitan Studios. I finally arrive at a magnificent indoor swimming pool that is a masterpiece of Romanesque design. Around the sunken pool, mosaics of iridescent blue and burnished gold shimmer on the walls, bright crests adorn arches, and swirling scrolls of gilt glint on beams. The still surface mirrors the glittering designs, making it difficult to distinguish where water finishes and walls begin. WR’s desire to conjure up impressions of a Roman bathhouse has created a pool fit for an emperor.

WR gathered ideas and objects for Hearst Castle on his extensive travels. I picture him as a magpie flying around the world picking up interesting pieces to carry back to his nest high on this San Simeon hill. This acquisitive collector gathered not only objects of art, but also shipped back carved monastery ceilings, sculpted church frescoes, and massive engraved monuments. Hearst Castle was not built to house WR’s art collection. Rather, the castle was constructed and then continually enlarged and extended to accommodate truckloads of treasures he plundered from ancient sites, salvaged from decaying dynasties, and bought at top-dollar auctions. The Neptune Pool and terrace, for example, was torn down and rebuilt three times before WR considered it complete. No wonder construction continued unabated for almost thirty years. 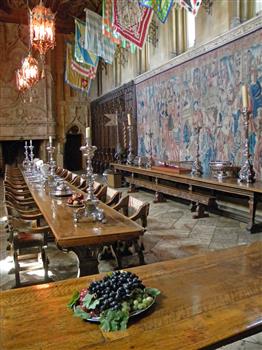 WR began planning for “something that would be a little more comfortable” in 1915. Then in 1919 he engaged an outstanding architect, Julia Morgan, who had graduated from Berkeley as a civil engineer before studying European architecture in Paris. Her blend of expertise ensured that the ornamental exteriors of Hearst Castle are supported by sturdy reinforced concrete structures, which have withstood the unsettling shudders and shakes of California’s San Andreas Fault. Ms. Morgan must have possessed considerable fortitude herself to withstand the capricious whims, fickle fancies, and frequent changes of mind that shaped and reshaped WR’s ideas for his castle.

It seems that expense was not a constraint. WR inherited his father’s fortune that included the San Francisco Examiner newspaper, and from this foundation he built a media empire that was the largest in the world, encompassing newspapers, magazines, publishing companies, and movie studios. Some say WR employed extravagant stories to increase circulation. This “yellow reporting” not only stretched the truth, but also espoused right-wing views and incited support for U.S. military intervention in Cuba, Puerto Rico, the Philippines, and Spain.

The tour guide leads us out into warm sunlight, across an extensive piazza, through a shady garden to a charming cottage surrounded by colourful flowers. There are three guest cottages on The Enchanted Slope: Casa del Mar facing the sea, Casa del Monte facing the mountains, and Casa del Sol that boasts the best views of the sunset. Inside a bedroom on a decorative tiled floor carpeted with a finely woven Persian rug stands a four-poster bed covered with a salmon-pink silk counterpane. Red wall hangings embroidered with gold thread adorn the walls and a ceramic statue of Madonna and Child sits on a rosewood cabinet beside the bed. The afternoon scent from tropical flowers gently wafts through an open window, fringed roller blinds temper the sun’s rays, earthenware tiles feel cool underfoot, and a Chesterfield sofa awaits an overfed guest wanting to snatch an after-lunch siesta.

Houseguests were left to amuse themselves during the day while WR directed his empire. There was plenty to do — swim, play tennis, watch a film, or visit WR’s private zoo, the largest in America, stocked with an ark full of exotic animals including lions, zebras, giraffes, and ostriches. However, guests were expected to join WR for dinner. As an encouragement, no cooking facilities were installed in the guest cottages. Although if guests overstayed their welcome, they would find their place setting moving further and further down the long dining table away from their host.

WR had other rules as well. In spite of the fact that by the 1930s he had separated from his wife Millicent and was living openly in an adulterous relationship with the actress Marion Davies, he did not condone promiscuity or extramarital affairs. Yet rumours abounded of lavish house parties where a cavalcade of guests including Charlie Chaplin, Harpo Marx, Charles Lindbergh, Bob Hope, and Dolores Del Rio would drink, dance, then flirt and frolic in the estate’s swimming pools. No doubt nocturnal ramblings and starlight trysts took place under WR’s sanctimonious nose, as Hearst Castle gained a somewhat notorious reputation.

Cary Grant, who stayed thirty-four times throughout the 1920s and ‘30s, said “Hearst Castle was a great place to spend The Depression.”

George Bernard Shaw told WR, “Hearst Castle is what heaven would look like if God had your money.”

But I imagine WR was more interested in entertaining powerful and influential guests who could further his political ambitions, like Franklin Roosevelt, Calvin Coolidge, and Winston Churchill. He aspired to become Governor of California and served two terms in the House of Representatives from 1903 to 1907. Sensing shifting public favour, he changed allegiance from the Municipal Ownership League to the Independence Party and finally to the Democratic Party, although he never achieved his ambition of becoming governor.

By 1947, WR’s failing health forced him to leave The Enchanted Slope for Beverly Hills where he died in 1951 at age 88. Even after twenty-eight years of continuous construction, he still considered Hearst Castle an unfinished project. In 1957 the Hearst Corporation donated the property to the State of California, although the family retains the right to visit and occasionally stay at the Victorian villa built by George Hearst. Hearst Castle was listed on the National Register of Historic Places in 1972, became a United States National Historic Landmark in 1976, and is now visited by over a million tourists annually.

Those visitors cannot fail to be impressed by WR’s fantasy castle on The Enchanted Slope, be amazed at the extravagant buildings, amused by his eclectic collection of artworks, and intrigued by the scandalous stories of shameless goings-on. The monument and the myths of Hearst Castle are a fitting legacy for one of the most outstanding and controversial characters of the twentieth century, William Randolph Hearst.

‘Hearst Castle’ in an extract from Stephen’s latest book ‘Three Harleys, Three Aussies, One American Dream: a 5,000mile motorcycle adventure searching for the Real America,’ that is now on sale online and in bookstores – for more details click here 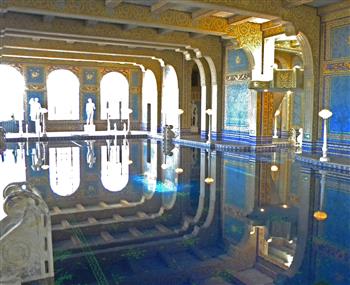