The hamlet of Quindanning, which is located 110km east of Perth in Western Australia, consists of four houses, the Old Quindanning Inn, St. Boneiface Church, and a dilapidated Community Hall. With the inclusion of a few dispersed homesteads, this district claims a total population of 163. Yet every Easter weekend for 40 years this population swells to over 1,000 when convoys of utes, 4WDs, and caravans converge at a sandy race track bulldozed out of the scrub on the edge of town for Quindanning’s Picnic Race Day.

Folks from farms and towns from miles around come to cheer on local riders and enjoy a day full of family fun that offers a rare chance to socialize scattered community members. It is a traditional bush race meeting where excited children look forward to searching for hidden Easter Eggs, dads take a welcome break from their labours to share a beer with distant neighbours, and mums can catch up on the latest gossip and goings on in town. Teenagers, in their best trendy gear, can’t wait to dance to a real, live, rock band. And maybe a few lonesome souls, starved of company on isolated outstations, are hoping for a romantic encounter that leads to a kiss and cuddle under a full autumn moon. 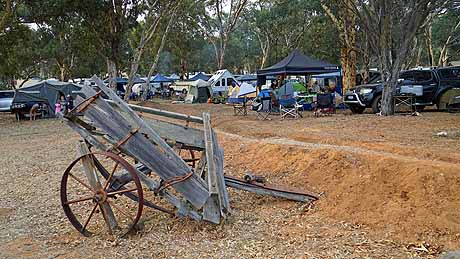 On arrival tents are pitched, swags unrolled, and a virtual village is created between a dry creek and a rocky hillside under shady Spotted Gums. Colourful awnings mushroom randomly across the hillside, caravans search for patches of flat ground, and one extended family forms a corral from five vehicles, then builds a mess-hall seating twenty out of folding tables and collapsible canvas chairs.

The only permanent fixtures at the race track are a couple of humpies nailed together from salvaged timber and rusting corrugated iron sheets, one serves as a make-shift bar, the other a temporary cook-house. Both are furnished with split logs for seats and rough-hewn planks nailed to fencing posts driven into the ground for tables. In the gloom behind the bar a mis-matched collection of rusting fridges and old ice chests are stacked with enough cans of beer to quench the thirst of an army. 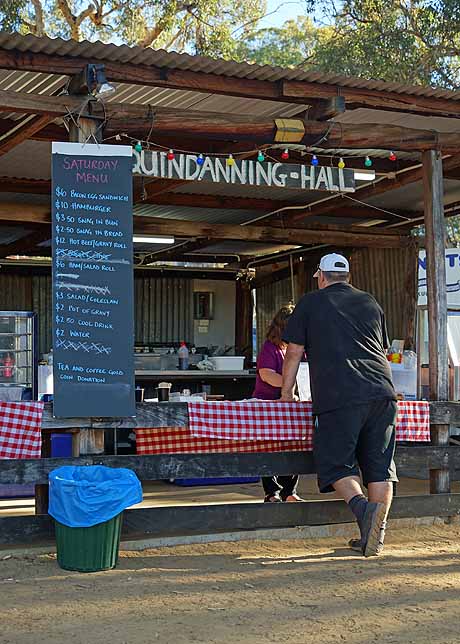 A long drive, a morning sun’s warmth, and frustrations of pitching a tent on stony ground are already driving some to seek solace from a cold can. And a tempting smell of sizzling bacon wafting from the cook-house is also drawing hungry campers to where jolly volunteers are frying up breakfast.

There is no shortage of volunteers who are working in the kitchen, behind the bar, gathering rubbish, cleaning temporary toilets, or for marshalling contestants and overseeing races. All money raised today is donated to refurbishing the dilapidated Community Hall and funding the district’s Bush Fire Brigade and St John’s Ambulance.

The dress code at Quindanning Races ranges from an ‘R. M. Williams fashion shoot look’ of unblemished doe-skin Akubras, tailored Stockyard shirts, fitted straight leg moleskins, and expensive made to measure boots for a few ladies, to a ‘I just got down from a tractor look’ of footy shorts, shearer’s singlet, and thongs for many blokes.

Amongst spectators on the hillside, struggling dry dirt farmers from the Wheat Belt periphery mingle with cashed-up beef breeders from lush plains beside the Collie River. They commiserate with each other on vagaries of weather, falling farm gate prices, and self-serving politicians who populate all levels of government. One bloke, in a battered hat is bemoaning a conspiracy of ”bloody lefties” that has taken over the ABC to promote same-sex marriage. Still, a rare day at leisure in convivial company eases their worries, restoring their commitment to battle on against mounting odds, confident that, in the end, “she’ll be right mate.”

Like a mullah from a minaret, loud-speakers call devotees to trackside for the big race—the Quindanning Cup where $800 cash and a cup for first, $500 for second and $300 for third is up for grabs. A disparate field of horses gather in a mounting yard. There are squat bush bred Brumby stock-horses, leggy Thoroughbreds, a pretty blond pony, and a fine boned Arabian crossbred. A couple of runners are already flighty; snorting, feeling their morning oats, and sensing building excitement. No fancy silk colours for jockeys, a marshal hands up numbered tabards to riders who wear an assortment of jodhpurs, jeans, riding club polos, or denim shirts. 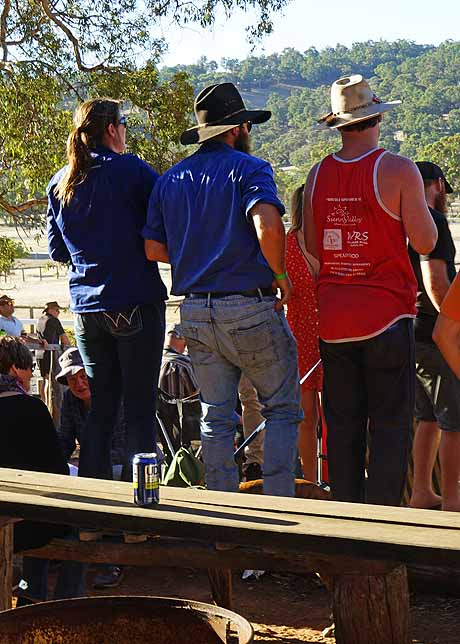 It is a restrained trot to the start-line; dressage riders sitting upright, elbows in, posting to the gate: western riders lolling back in their saddles, one hand high holding both reins, their other loosely swinging by their sides.

Punters assess how each horse and rider is travelling evaluating confirmation and condition, diligently searching for a hint of a winning trait. Rumours sweeps across the crowd like a shadow. Dubious insider tips on latent potential and exaggerated rider’s assessments are surreptitiously circulated. Then sporting wagers are struck with a spit and handshake. While beside the rail, a shifty looking blow-in bookie is stuffing folded notes into a battered leather bag as he hands over scribbled dockets confirming questionable odds.

Stewards have scrutinised all entrants carefully. Any horse registered as a race horse, that has undertaken a barrier trial, or is in the care of a licensed horse trainer is not allowed to compete. Picnic Race Day is for working stock-horses and recreational mounts only. The Chief Steward, noticeably the only person wearing a jacket, eyes any unknown horse with suspicion: renamed ring-ins have carried away prizes and sent bookies broke at past meetings.

The judgement of stewards was brought into doubt a few years back when they selected the wrong piglet for the ‘Catch the Greasy Pig Race’. The little porker they chose showed a surprising turn of speed, slipping through grasping hands of a mob of pursuing children, and then bolted into the bush never to be seen again. The Chief Steward’s reputation cannot withstand another slip-up like that!

The runners gather alongside a peg 1,000 metres down the track. No starting gates or moving barrier there, it’s a standing start from a line scraped in the sand by a boot heel on the call of the Chief Steward. Jostling horses prance, blood up, ears forward, coiled like springs, ready to run. Riders strain taut reins, tense calves, force their heels down struggling to hold back their feisty mounts.

A shout and they bolt away straight into a fast canter. The pony on the rail possibly jumped the start but there is no chance of a recall, no point in a protest, nothing will stop this stampeding herd as they break into a gallop.

Loose going on soft sand soon tires horses that are not race ready; show ponies slow; ring performers run out of puff. The slender Arab cross-bred sprinting to the lead is drawing away, but two Brumby stock-horses are showing their famed spirit and stamina staying the pace as the field strings out along the back straight.

Rounding the final bend it’s the Arab-cross in front by a nose from a plucky Brumby stock-horse alongside in a flat out gallop. Both riders are out the saddle urging their mounts on. Up on the hill punters are also out of their seats shouting encouragement.

Thundering onto the straight it’s down to heart and spirit— which horse will fight and which will fade— it is either’s race to win.

Over the final fifty metres the Arab’s sprint is spent: it is the Brumby stock-horse who has the guts to keep going: he may not match the Arab for flat out speed but he has the will to win. Breathing hard, flanks glistening, he lunges across the finish line half a head in front, a jubilant rider aboard raising a salute to the cheering crowd.

Race over, there’s a rush to the bar to splurge winnings or sink thoughts of losses. A corner of the bar is commandeered by six life members of the outback club, bare-armed blokes in singlets, sleeveless shirts, faded jeans, and work boots, their ruckus growing louder with each spent can tossed into a bin. These jackeroos are crack shots with empty tinnies making a contest of lobbing them into an open forty-four gallon drum eight paces away.

They also have a sharp eye for trim little jillaroos that trot by in tight jeans and low cut tank tops. A quick glance, a sly smile, then it’s back to blokey bravado with their mates. Another beer may provide courage enough to overcome their apprehension to boldly walk over and chat up a girl. Another two or three beers and they’ll be too far gone for any girl to give them the time of day.

Races continue throughout the afternoon; horse races interspersed with foot races for boys, girls, blokes, sheilas, and even dog races where a gallant three-legged poodle raised the loudest cheer of the day.

All too soon twilight tinges a few wisps of cloud pink; ochre rocks on surrounding hills fade to deep purple ridges against a darkening sky, and shimmering specks emerge to dot out a familiar Southern Cross, as a yellow autumn moon rises to bathe gum trees in a ghostly luminescence.

A growing crush of drinkers around the bar hardly cast a glance at wonders unfolding in the heavens. They’re tanked up and ready to party. Obligingly the band ‘Essence’ bursts into life belting out Men At Work’s “The Land Down Under” from a flat-bed truck that serves as their stage. Within minutes, on a dancefloor of dirt alongside the truck, boots are kicking up clouds of dust. Without a pause, ‘Essence’ charge on pounding out a cavalcade of Aussie Pub Rock Classics.

Looking at band members, ‘Dinosaurs’ would be a more apt name for the group. Yet years of belting out Rock n’ Roll has not dimmed their enthusiasm; they attack each song with drums thumping, base rocking, keyboard jumping, and tortured notes wailing from a lead guitar. All instruments amplified to ear splitting volume through a wall of speakers capable of shaking leaves off trees on the other side of the race track.

From the heaving mass of bodies before the band; arms wave to “Flame Trees”; voices shout vulgar responses to “Living Next Door to Alice”, and heads almost bow down in homage to the Bogan anthem, “Working Class Man.”

Sixteen or sixty everyone seems to know every word of every song. Surprising, given half of them weren’t born when these hits topped the charts. Are Aussie Pub Rock Classic still pounded out in country hotels? Did they grow up listening to mum and dad’s old CDs? Certainly this younger generation was born into a dynasty of dedicated Aussie rockers.

Hopefully, in another 40 years these youngsters will continue these bush race meeting traditions by bringing their children to hunt for Easter Eggs and cheer on local riders at some future Quindanning Picnic Race Day.

You too can enjoy country hospitality, and maybe win a few dollars, this annual bush race meeting. Any Easter Saturday, turn left out of the Quindanning Inn carpark, then right into the Harvey-Quindanning Road, and then just follow the convoys of utes, 4WDs, and caravans to the Quindanning Picnic Race Day. 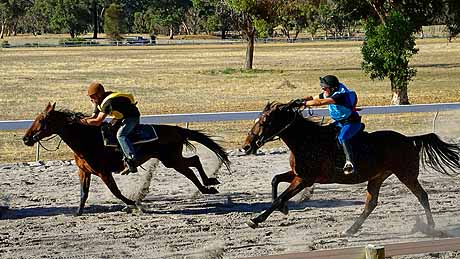