A blustery Easterly wind snatched at a flag flying at half-mast on a ghostly white pole in the predawn light. . .

A blustery Easterly wind streamed spray from foaming waves that rolled into the bay; it swayed clumps of grass sprouting from sand-dunes piled upon the shore, swept between weathered cottages in the settlement, and swirled around a modest stone memorial set on a ridge above the beach where it snatched at a flag flying at half-mast on a ghostly white pole in the predawn light.

Beside the memorial a small crowd had gathered in the gloom. There could have been a hundred or more braving the brisk wind, and damp, dawn chill - a surprising number on an isolated holiday island. In the crowd there were old folks of course, but also young parents with toddlers in push-chairs, middle-aged yachties warm in their wet-weather jackets, and even groups of teenagers huddled together wrapped in ex-army blankets, still bleary-eyed from last night’s partying.

A lone piper, barely visible at the far end of the ferry jetty, struck up a lament. The mournful wail of the bag-pipes carried across the waves as he slow-marched towards the memorial. A smart Royal Australian Navy Honour Guard mustered between the memorial and an old Beaufort Anti-Aircraft gun that had been wheeled out for the occasion. Officials quietly took their places, all solemn and serious, beside the flag-pole.

The speeches began with a ‘Welcome to Country’ by a Noongar elder. A naval Captain resplendent in an immaculate white uniform reminded us of the importance of this day; of past battles, and of present conflicts where military men and women are currently serving. The wizened priest from the little chapel on the hill said a prayer in a broad Irish accent as his cassock billowed in the wind. In their words there was no triumphing of victories, no exultation of war, just heartfelt tributes to service, courage, and loss. 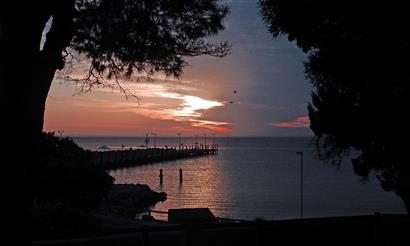 Then an old RSL digger weighed down with medals stood stiff and straight to recite The Ode:

They shall grow not old, as we that are left grow old:

Age shall not weary them, nor the years condemn.

At the going down of the sun and in the morning,


As first blush of dawn brightened the sky, a bugler sounded the Last Post while the flag was slowly lowered. A couple nearby began to weep. We all heard them as they choked back their tears and hugged each other. But what could we do? What could we say? We all just stood there.

The sun edged above the distant hills shafting gold beams into a rosy sky that lit the bay, the beach, the cottages, and the faces of the crowd in a soft bronze glow. Seeing those faces, a realization also dawned that we did not just stand there: we stood with that couple, feeling their loss – and it became our loss.

That morning on Rottnest Island, across the nation, and in distant lands millions of Australian stood together in silent solidarity; remembering together, mourning together, and giving thanks together in grateful appreciation of past sacrifice and present bounties.

We remembered a dawn on the 25th April in 1915 when soldiers of the Australian and New Zealand Army Corps landed on the Gallipoli Peninsular to vanquish Turkish forces dominating the Dardanelles shipping lanes to Istanbul. By the time this ANZAC force withdrew after eight months of fierce fighting, over 11,400 of its members had died.

Remember the 25th April - ANZAC day - a day to pause and reflect. A day to stand together for the fallen, the grieving, and for the freedoms we now enjoy.

© Stephen W Starling
Rottnest Island is a tranquil and pristine holiday destination only an hour ferry ride from Perth. For more information and to book accommodation contact the Rottnest Island Authority: www.rottnestisland.com

[1] Extracted from Laurence Binyon's poem, 'For the Fallen'