Sailing into port are 63 tall ships bearing over 500 sailors ready to celebrate Sail Amsterdam; a five day festival of all things nautical.

Crowds of spectators pack docksides around Hi Ji, a wide expanse of water that sweeps into the port of Amsterdam. An armada of small boats churn up the harbour. Above a TV news helicopter circles. A wave of excitement washes over the crowds as the tips of three tall masts are glimpsed moving beyond the trees of Oever Park. Then fingers point and cameras click as the enormous black hull of the imposing square-rigged Stad Amsterdam slowly emerges around Buikokterweg headland. Following her wake are a flotilla of 63 tall ships bearing over 500 sailors into port for Sail Amsterdam; a five day festival of all things nautical.

Yet for this city and its citizens Sail Amsterdam is more than just a festival; it is a rekindling of a centuries old infatuation with ships, sailors, and the sea. And today Amsterdam looks as pretty as a spring bride striving to look her best to welcome home a sweetheart who has sailed the oceans. Old houses that lean at odd angles beside canals have been freshly painted, boxes of flowers are set out amongst the bicycle racks, and colourful banners flutter from every lamp-post. 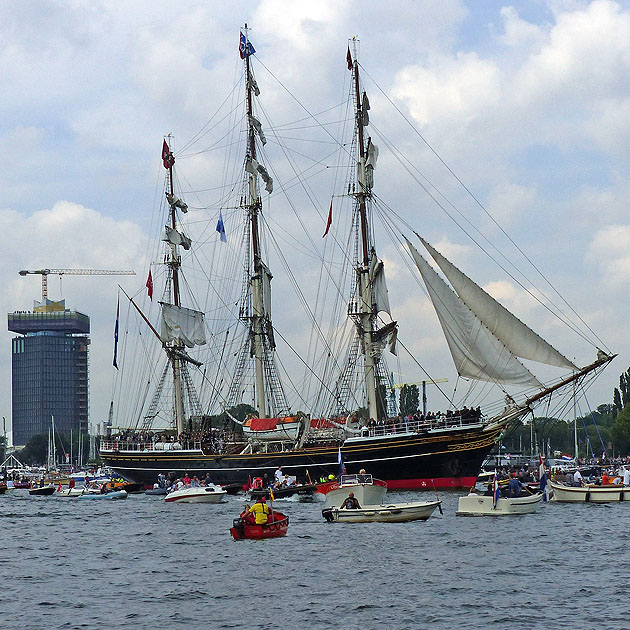 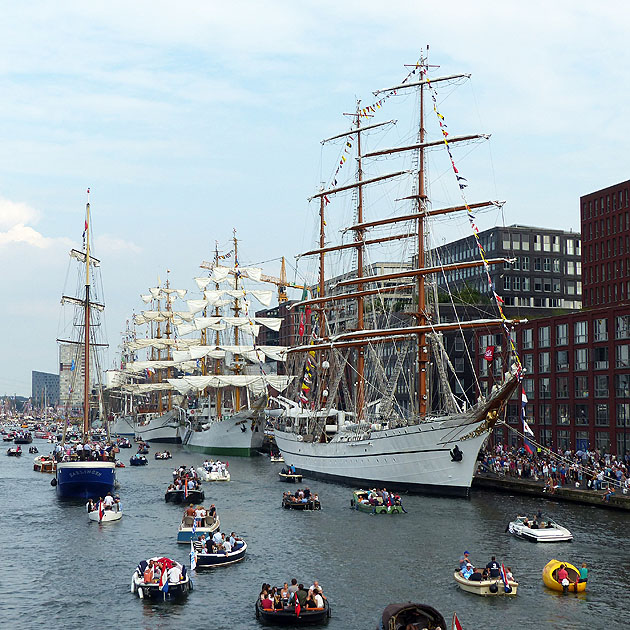 Once every five years sailing ships both grand and lowly chart courses to Amsterdam that culminate in a spectacular parade up the Noordzeck Canal to wharves right in the heart of the city. Following Stad Amsterdam’s to berths along the Jihaven are the formidable three masted square rigger Dar Mlodziery from Poland with uniformed naval cadets lining the rails; the vibrant barque Gloria from Columbia with sailors dancing the samba high in the rigging; the pugnacious Spanish galleon Atyla who’s swashbuckling pirate crew wave cutlasses; the sleek-hulled global adventurer Europa recently returned from Antarctica with an international crew; and the weather-beaten and weary sailors of the barquentine Young Endeavour that flies an ensign frayed by a 13,000 mile, nine month voyage all the way from Sydney Australia.

A cannon on Sixhaven headland booms a welcome; Atylea responds by firing back a broadside delighting children gathered along the shore. Tug boats toot, ferries blast air-horns, a police launch wails a siren, and crowds afloat and ashore give a rousing cheer as the stately Strad Amsterdam glides past the 17th century Basilica of Saint Nicholas. The police launch harries errant skippers vainly trying to keep the shipping lane clear. It seems every vessel available is on the water; luxurious mahogany hulled cabin cruisers, commandeered workboats with families aboard, an old gaff-rigged fishing boat wallows along, speakers blare from a rumbling V8 ski boat, and a multitude of aluminium dinghies dodge and weave amongst the foaming wakes. The whole evolution of naval engineering is afloat as ancient luggers from an age of wood, canvas, and sextants jostle with modern vessels equipped with carbon-fibre hulls, Kevlar sails, and satellite navigation.

At dead slow Strad Amsterdam, its towering masts taller than office blocks, edges into Jihaven dock. Twenty years ago she was fitted out by local shipwrights and trainees at the Maritime Museum of Amsterdam: today this city’s ship is coming home.

Lines are thrown; tugs take up the slack, then in a space seemingly too narrow to swing her 76 metre hull, Strad Amsterdam starts to turn. The choreography of tall ship and tugs has the grace of a ballet — ‘a pas de deux’ for master mariners — as the great ship pirouettes her bow and stern clearing unyielding stone wharfs by mere metres. Shore crews catch heaving-lines then manhandle thick warps around stout bollards. Aboard, hauling parties chant as they sweat-in the warps inching the 1,038 tonne hulk alongside without a scratch. Any novice skipper who has battled crosswinds and currents whilst trying to turn a boat in a narrow waterway can only stand mute in appreciative awe. 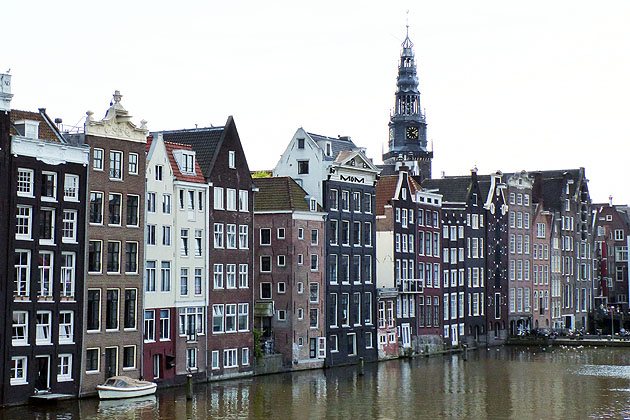 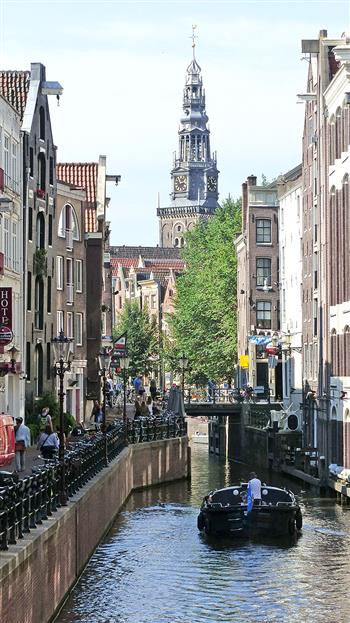 Warps made fast, sailors swarm around the ship rolling out fire-hoses, spraying seawater, and scrubbing the deck furiously with long handle brushes. Aloft agile crew members swing out onto yards wrestling stiff canvas, furling and lashing sails onto spars. On the poop deck brasses are buffed with extra verve. All crew members work at a frantic pace, possibly to impress spectators who will soon come aboard, or more likely in an effort to finish their tasks quickly and then abscond on early shore leave.

Each ship in turn swings out heavy wooden gang-planks that are lowered with a thump to scrape on Veemkade Quay’s uneven stone paving. Spruced-up sailors then disembark; smart Polish naval cadets in immaculate uniforms topped by white peaked caps the size of soup-plates, Colombians in dark blue polo shirts and white cotton chinos swagger down Gloria’s gangplank still dancing to an unheard samba, and the weary crew of Young Endeavour come ashore in faded tee-shirts and baggy shorts appearing miraculously rejuvenated and ready to party with the welcoming crowds lining the dockside.

And the party begins as soon as the sailors step on land. Amsterdam embraces her beloved seafarers with the warmest of homecomings; at pop-up bars along the wharf gallons of Grolsch beer is slopped into plastic cups, the irresistible aroma of sticky-sweet Dutch waffles drifts from a kiosk, on temporary scaffolding stage a band blares out ABBA tunes, and a group of girls, wearing shorts two sizes too small, strut along the quay eyeing the new arrivals eager with anticipation. As it has been for centuries; infatuated Amsterdam is ready to share all its delights with its sweethearts who sail the seas.

You too can enjoy the wonderful festive atmosphere of Sail Amsterdam: For information of future festivals visit: https://www.sail.nl/en/about-sail/    For information on other Tall Ship Events visit:    https://sailtraininginternational.org/adventures/tall-ships-races-regattas/