Following in the wake of Greek, Roman, Arab, Norman, and Spanish invaders who bequeathed grand architecture, vibrant culture, and an eclectic cuisine to this picturesque isle at the foot of Italy.

Beyond Palermo’s breakwater I hoist sails that are stiff with salt, the noisy diesel engine is silenced, and a light breeze carries the yacht below me out onto a still Mediterranean Sea. I sail into the wake of the Greek triremes, Roman galleys, Arab dows, Norman longships, and Spanish galleons that have landed wave up on wave of invaders that plundered this mountainous island at the foot of Italy. Conquerors who left their marks in grand architecture, vibrant culture, eclectic cuisine, and diverse faces of the people. Gathering speed the yacht’s bow cleaves the shining still water outward bound on a voyage of discovery to uncover fragments from Sicily’s intriguing past.

I am glad to leave Palermo with its potholed streets choked with traffic, scruffy buildings daubed with graffiti, hurrying city folk wearing harassed frowns, and narrow alleys hemmed in by featureless concrete apartment blocks that trap car fumes and cooking smells polluting the hot humid August air. Yet behind the city’s unattractive first impressions there are rare gems to unearth: like the exquisite Palermo Chapel, a rare blend of Byzantium icons and Moorish mosaics, a fine example of the magnificent architecture collaboration between Norman Christian artists and Sarsen Muslim stonemasons can create. 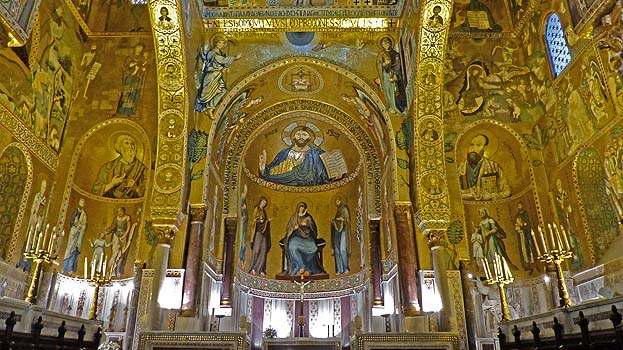 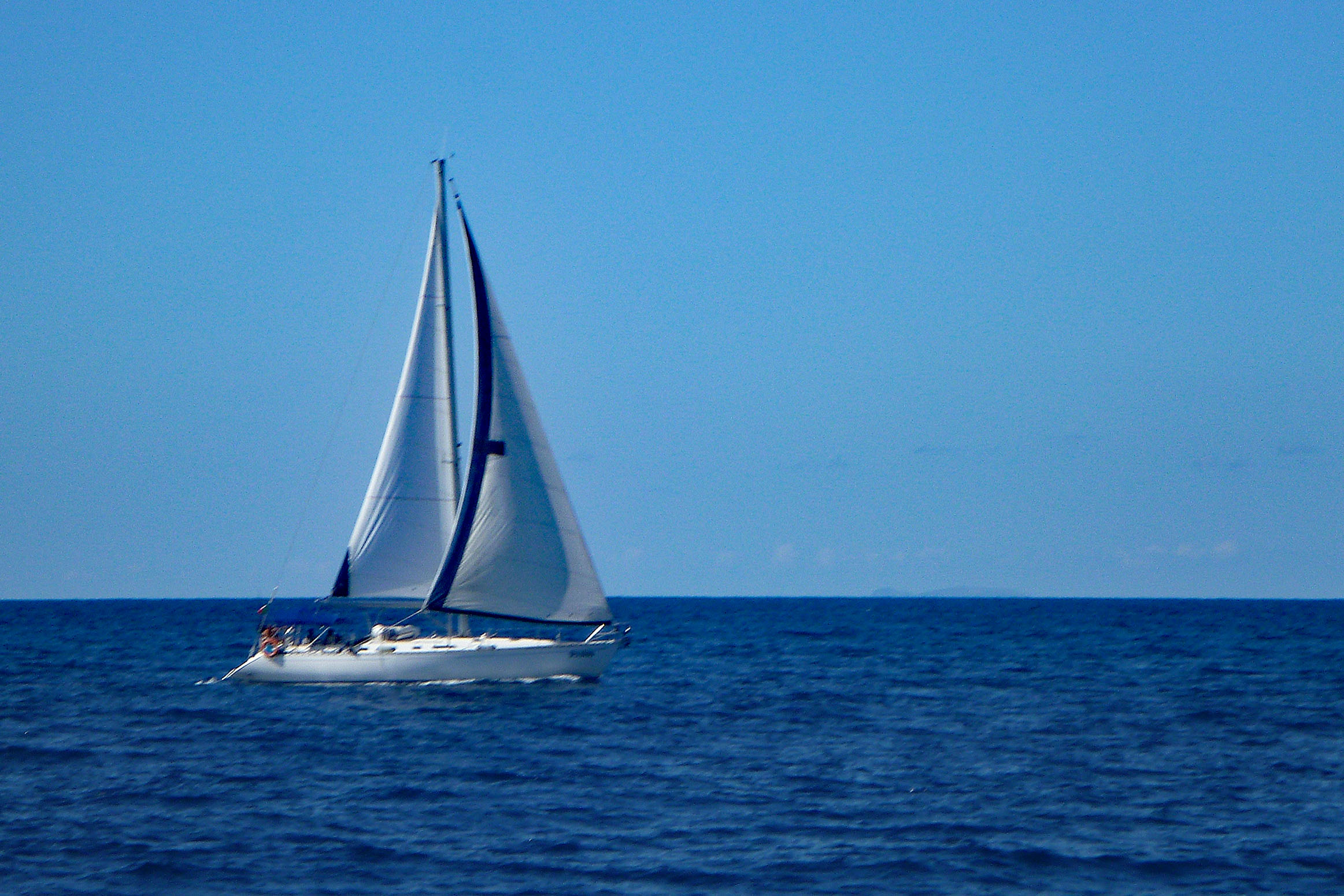 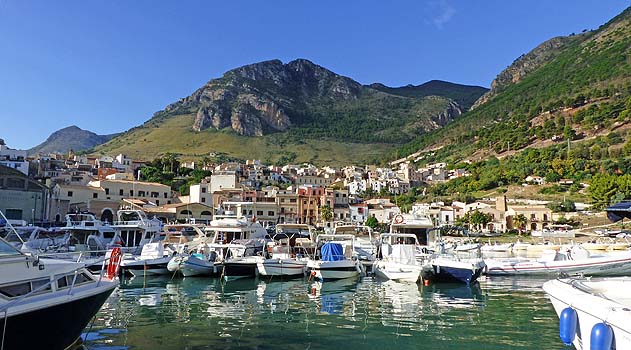 A freshening breeze fills the sails: the yacht Coccinella, leans on the wind hastening out to sea. A fifty-foot Benateau Cyclades sloop, she is a fast comfortable cruiser with more than enough room for six Aussie shipmates banded together for this seven day adventure.

Turning westward beyond Cape Gallo a spectacular coastline comes in view. Black crushed lava-stone beaches nestle between crumbling limestone cliffs. In places a restless sea has eroded the soft limestone cliffs forming inviting grottos lit by an iridescent blue glow reflected from sparkling waves. Above the cliffs a patchwork of rock-strewn fields are squeezed on a narrow coastal plain that butts up against steep hillsides that rise to angular mountains with sharp, volcanic peaks.

A brief stop for a swim and a snack in the sheltered anchorage of Trappelo, then we sail on to Castellanmanie del Golffo, a charming town of pastel painted houses tumbling down the hillside to a sheltered port protected by an imposing 10th century Norman castle.

Nearing port an aluminium dingy races out to greet us steered by a skinny Negro lad. He shouts a warm welcome in broken English, then a lively banter ensues over mooring fees. A price agreed, he pilots our yacht into harbour guiding us to a pontoon right below towering castle walls. Once securely moored it is time to break-out the grog for a thirsty crew who now lounge around the cockpit savouring the cool of evening watching a rosy sun sink slowly behind the harbour wall.

Later, flushed by sundowner drinks we teeter across the narrow gangplank then sway along pitching pontoons making our way ashore. Climbing a stone stairway through a portal in a fortified wall we discover a tidy town of narrow streets lined by cream, beige, and brown two and three storey houses. Parents sit in doorways watching excited children rattle their scooters over the cobblestones. While on Corso Giaseppe Garibaldi stylish couples stroll by fashion boutiques, trendy bistros and noisy bars.

Posters promoting beers with irresistible names; ‘Slurpa’ an Indian style Pale Ale, and ‘Gulpa’ a Bavarian wheat beer, draw us in to a narrow dimly lit ale house. Downing a pint of Gulpa the crisp and flavourful brew slates my thirst and sparks a growing appetite. So, after sampling a couple more homebrews, we meander back along the foreshore and stop at Solemare, a humble café with weathered pine tables set on a boardwalk over the beach. There my appetite is slayed by a huge steak of swordfish expertly pan-fried in in herbs and butter, accompanied by what could be called a Greek Salad of olives, peppers, and lettuce sprinkled with crumbly feta cheese.

Next morning we climb the portal steps once more, this time turning inside the castle’s solid stone walls to enter an inner keep where, surprisingly, stands an Italian renaissance villa complete with ornate pink plasterwork, black wrought iron balconies, and faded green slatted wooden shutters. The villa houses an eclectic collection of artefacts tracing the legacy left by Sicily’s occupiers; from Athenian, and Roman, through Byzantine, Berber, Norman, to Aragonese. More recent memorabilia illustrate recurring revolts against rulers from mainland Italy in 1800s, the rise of Fascists in the 1900s, and attempts to eradicate the Mafia that continue to this day. One thing unseen in all the displays is the ghost of Baron di Carine’s daughter who was murdered by her father in 1563 for being unfaithful while betrothed. Locals say she still stalks the villa at night searching for her lost lover. 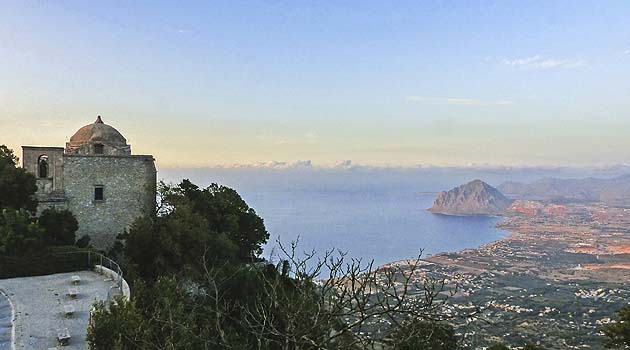 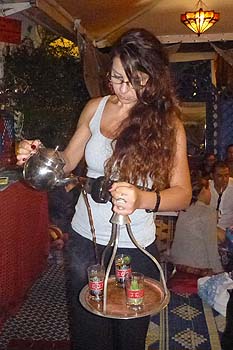 After lunch we sail on chasing a fickle breeze along the coast to San Vilo Lo Capo, a chic tourist town boasting an inviting arc of golden sand curving between dark dominating headlands. Legions of Sicily’s most recent invaders lay scattered across the beach: Germans, British, and a few Russian accents murmur from bodies simmering in sun-screen oil on the hot sand. Beach balls, umbrellas, and gaudy printed towels hang outside souvenir shops fringing the shore. Café menus list the lowest denominator of international food; burgers, hot dogs, and fish and chips. Yet straying into a laneway, where a vivid purple Bougainvillea cascades from an upper balcony, we find an intriguing Arabic restaurant Thaan. An olive skinned girl, who’s flowing copper coloured hair frames the darkest of dark eyes, beckons us in.

We follow her past ornately carved wooden doors to a secluded courtyard where, under stretched canvas, hand tooled leather cushions are scattered on a Persian carpet. The air is scented with vanilla rising from a tall hubble-bubble pipe passed around a cluster of North African men who loll on cushions and sit cross-legged on the carpet. Across the courtyard is a grand Arabesque mansion with colourful tilted floors, sculpted archways plastered with geometric patterns, walls decorated in intricate blue, white, and gold mosaics, and high domed ceilings hung with shiny octagonal brass lanterns. Taking high-backed chairs around a long table we are served a delicious Arabic feast of wood smoked flat bread, tangy humus, spicy kofta, fine chopped taboule, and then a slow baked marinated goat complemented by wild rice spiced with cloves and sandalwood.

Overfed we retreat back to the courtyard to squat on cushions while our beguiling hostess serves hot, sweet mint tea dramatically poured into thick glasses in a long curving arc from an ornately embossed metal tea pot. A silver tray of sticky Turkish Delights is shared as we master the art of steadily drawing smoke from a pipe to make charcoals and resins in its bowl glow red releasing their intoxicating fumes. Inhaling the heady vapours in such exotic surroundings it would be easy to believe the carpet beneath my feet has flown me to a Bedouin’s tent in some distant Arabian desert.

Yesterday’s wind has faded, no sense in setting sails, it is the steady beat of a twin cylinder diesel that propels Coccinella around the western apex of the triangle that is Sicily, and then south down her coast to the sprawling city of Trapani. No tourists sunning themselves on this seashore; only container wharfs, ferry docks, shipyards, and warehouses stretch out along the waterfront. The clang and thump of heavy machinery, and the stench of dead fish, drift out over the water to greet us. Still, once inside a breakwater our yacht is shepherded to a brightly painted marina complex complete with café, bar, and wonderfully spacious hot showers – such a joy after the cramped cubicle on-board.

Punching in a secret code swings open the steel gate in a marina fence topped with razor-wire onto shabby streets, crumbling concrete apartment blocks, and a treeless square where four scruffy boys are kicking a football. Walking along Via Cristoforo Colombo we come to the source of the welcoming stench: the city fish market.

A stocky, weather-beaten Sicilian fisherman chugs his battered white and blue wooden fishing boat to the wharf. Mooring ropes are made fast. Many calloused hands sling gleaming fish into tubs. Showers of ice chill the catch. Tubs are then trundled away on long handed trollies to rows of marbles slabs where they are set out under the shade of a fraying canvas canopy. An auctioneer walks the isle shouting in turn the price of large steely blue tuna, long legged red crabs, and an octopus with squirming tentacles. A jovial banter with potential buyers bats bids back and forth until a deal is stuck with a slap of a hand and purchases are promptly wheeled away. Fish hooked from the sea at dawn will be served on a plate before sundown.

Strolling on, narrow dusty streets widen to paved boulevards and crumbling tenements are supplanted by grand stone townhouses. Rua Grande leads us into the old centre of town, an aptly named avenue lined with imposing civic buildings, embellished Baroque churches, and impressive stone statues. Invading Spanish bequeathed Trapani, Noto, and Siracusa with fine buildings, and the exquisite Neapolitan sculptures and fine Flemish art work within, when kings of Aragon ruled Sicily and prospered from a lucrative trade in salt. Fully embracing the district’s Spanish ambiance we wander into a wood panelled taverna, perch on stools at the bar, and gorge on plates of chorizo sausages, aged honey smoked ham, stuffed peppers, Romesco meatballs, and other tasty tappas while sipping a delicate pink Andalusian Tempranillo rosé.

The next morning a funicular cable car swings us over the rooftops of town to the medieval mountaintop citadel of Erice. Disembarking through buttresses and battlements of impregnable walls we find a labyrinth of steep streets paved with pebbles carried up from the beach, alleyways so narrow two donkeys could not pass, and endless flights of stone steps worn smooth by centuries of passing feet.

The origins of Erice are shrouded by the mist of time, just as clouds now smother the settlement on overcast days. Greek mythology tell many tales; that Hercules landed here, that the settlement was founded by sailors Virgil put ashore, that Eryyx built a temple here dedicated to his mother Venus Erycina. Certainly, archaeologists have unearthed many temples to a succession of Gods: a Phoenician to Astarte, a Greek to Aphrodite, and a Roman to Venus. Erice still holds sacred significance today with over sixty Christian churches crammed within its substantial walls.

It is hot climbing flight after flight of steps in the midday sun. Small shops display vividly glazed Maiolica pottery. However, I find another local craft more appealing: hand-made sweets blending the subtle flavours of almandine and marzipan, orange and chocolate, and rose-scented sugar-coated galantine. I buy a bag-full of sweets to boost my energy up the final flight to Giardino del Balio where my efforts are rewarded by a stunning view that takes my panting breath away. From this vantage point a kilometre above sea level a glorious panorama of western Sicily stretches out towards a hazy horizon; steep sided mountains, flat arid plains, dots of red rooved houses, sweeping sandy beaches, all framed by a cobalt blue Mediterranean Sea.

At that moment I realize I have fallen in love with Sicily: the uninviting initial impressions have been totally overwhelmed by her scenic natural beauty, intriguing past, and wealth of historical and cultural treasures. Tomorrow I will sail away like other seafarers before me carrying treasures plundered on this voyage of discovery: not gold or silver but precious memories of this intriguing isle captured in a camera and held close in my heart.

For more information on Sicily's intreguing past visit:  https://www.visitsicily.info/en/ 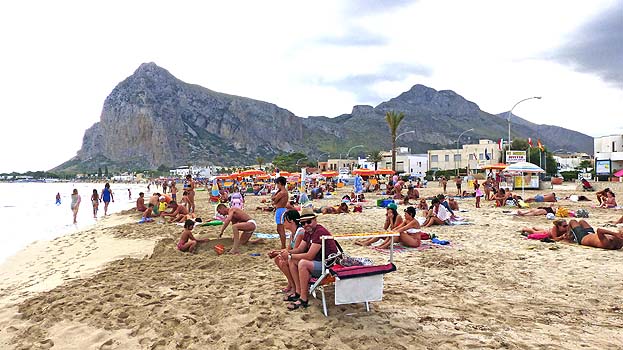