Katharina is bound for a fabled volcanic island reputed to be a last sanctuary of prehistoric creatures whose bone crushing jaws possess a lethal, poisonous bite.

Katharina’s roughhewn timber bowsprit points out of the Wainilu bay as she slowly motors onto the Flores Sea. She is bound for a fabled volcanic island reputed to be a last sanctuary of prehistoric creatures whose bone crushing jaws possess a lethal, poisonous bite — the Komodo Dragon.

Rounding Pulan Puga headland, sensing the freshening breeze, crew members muster to hoist sail. Barefoot in shorts and Tee shirts they swarm over the curving iron-wood boards; uncoiling heavy hemp ropes, confidently step out on the timber bowsprit to unbundle stiff canvas foresails, and scramble up steel wire rigging to unfurl top sails bleached by a tropical sun. Teams swing on halyards at the two stout wooden masts raising main and mizzen sails. Others aloft tug on outhauls to tension gaff top sails. They work quickly, communicating by hand signals with the First Mate on the aft deck, coordinating the sequence of setting sails to keep our ship on course. Katharina catches the wind, sails fill, sheets strain, and the main engine is stilled as the breeze carries her on, the sheer line of her raised prow effortlessly parting the shining still water. 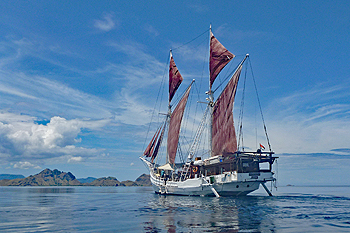 The enormity of the estate becomes apparent as I continue to climb stairs and stroll on through lush gardens to reach the Neptune Pool. This outdoor swimming pool is an inviting circle of sparkling water flanked by shady colonnades set into the hillside. Statues of swans stand at the water’s edge marking the four points of the compass quadrants. Below the water dark tiles trace a geometric pattern on a blue bottom, and stepladders fashioned from solid marble sink below the surface, tempting a swimmer to take a dip.

The centerpiece of the colonnade is a Roman temple façade of six marble pillars twenty feet tall supporting a capstone carved with classical characters. This is not a re-creation but an authentic ancient temple, dismantled stone-by-stone in Europe, and shipped halfway across the world to be reassembled on this American hillside. A special hillside, one WR called “La Cuesta Encantada” — “The Enchanted Slope.”

The montage of mismatches continues as I step into the cool gloom of a grand banqueting hall where a high carved wood panel ceiling is supported by bare sandstone walls hung with dark tapestries; drab flags fly listlessly from ornamental brass poles and in between, alabaster reliefs depict classical Greek scenes. To one side a solid wooden table large enough to seat thirty is set with gleaming cutlery lit by solid silver candlesticks three feet high, while scattered around is an eclectic collection of statues, paintings, and stuffed animals. This cavernous chamber has the appearance of a Scottish castle and the atmosphere of a horror movie.

Weaving between islands and reefs Katharina follows in the wake of Marco Polo, Antonio de Abreau, and Ferdinand Magellan, explorers who searched these waters for the fabled Molucca Islands on whose steep lava soil slopes exotic cloves and nutmeg trees grew. She sails a similar course as intrepid traders who followed, haggling for cargos worth their weight in gold that generated tenfold profits on reaching the dining tables of Europe. Fortunately Katharina does not risk pirate attacks or the proxy wars fought by European privateers to control this lucrative trade – although the handsome, coffee skinned crew members swinging from the rigging are clearly descendants of those brigands of old.

Katharina’s quest today is not for cloves, but for an even more elusive treasure, only found on three islands amongst the 18,000 that make up modern Indonesia. Not the major islands with evocative names like Java, Sulawesi, and Sumatra that conjure images of steamy jungles, exotic wildlife, and primitive tribes untouched by western civilization. Katharina is bound for tiny Rinca Island; an isolated, volcanic outcrop within the Komodo National Park that UNESCO accredited as a World Heritage Conservation Area in 1986.

The estimated 2,500 dragons that roam free on the islands of Rinca, Pedar, and Komodo are the throwback to an age of dinosaurs. This species of giant monitor lizard (Varanus Komodoensis) grow to three metres in length and can weigh up to 150kg, yet are capable of sprinting at 20kph to run down, catch, and kill deer and water buffalos.

They deliver a cruel death too, crushing prey with their powerful jaws. Even if the poor beast escapes with a mauling, bacteria secreted from the dragon’s teeth will slowly disable the victim. A dragon will trail a wounded water buffalo for hours: the stench of rotting flesh often drawing other dragons to join a final feast, claws tearing apart the half dead animal and jaws crunching the carcass, until only a skull and horns remain.

Joining Katharina’s quest today are twelve Australian adventurers, shipmates for a week as we seek out Komodo Dragons, climb volcanos to see colourful mineral lakes, trek up hillsides to witness traditional whip dances, and plunge below shining still water to snorkel over vivid gardens of coral surrounded by shoals of playful tropical fish.

Katharina drifts into a narrowing inlet where steep hillsides shrouded by dense jungle close in. Sheltered from the breeze, a still, oppressive humid haze smothers our ship – a stillness shattered when clattering anchor chain rattles from a locker, over the side, to plunge though clear water streaming a trail of bubbles as it sinks to a sandy bottom below.

The dinghy is lowered and six wide-eyed adventurers scramble over the side to motor across to a rickety jetty. We clamber up a slippery weed-covered ladder to be greeted by two smiling, uniformed National Park Rangers wielding long bamboo poles with ‘Y’ cleft ends – surely an inadequate defence against these notoriously dangerous dragons.

The Ranger’s safety briefing is not reassuring either: although Komodo Dragons are lazy, hunt infrequently, and can go for a month without eating, they are unpredictable. Kings of their domain and not threatened by predators, dragons will challenge and chase intruders, and they can out run and out climb any animal — including a man. Having got our attention, everyone heeds the Ranger’s instructions to keep together, stay alert, and to stand still if confronted by a dragon.

We walk single file, one Ranger in front, one behind along a narrow path cut through dense scrub where the buzz of insects and squelch of boots in the mulch are the only sound. Out on a mud flat just five minutes walk from the jetty a dragon lays sprawled across our path, warming its cold blood in the morning sun. This two metre long adult male must weigh over 100 kilograms, its muscular frame more like a crocodile than a lizard. It is a creature from another age, truly a dragon from ancient mythology now living and breathing just metres away with its scaly gunmetal grey skin, curving black claws, and powerful jaws lined with rows of sharp, yellowing, teeth.

The monster raises its head and fixed us with two black beady eyes: his stance says “this is my ground: if you want to pass, go round”. So we do, taking a detour teetering across the slippery mud flat keeping a safe distance from this defiant sentry while watching for other monsters lurking amongst the surrounding tangles of mangrove roots.

Safely across, now splattered in smelly, slimy mud, we re-join the path that leads on through a shady glade beside a slow moving creek. Emerging from under the jungle canopy the path then winds up a hill covered by coarse grasses that scratch at boots and shins. The rising sun burns into our backs as we clamber upward, sweat dripping from brows and staining shirts. 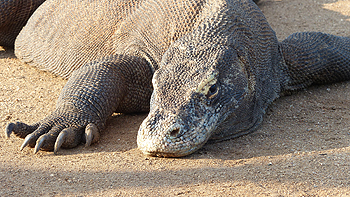 From the peak we see Katharina at anchor, a dazzling white ship on deep blue water enclosed by hillsides of vivid lush green. Beyond, out to the horizon, a chain of islands dot the Indonesian archipelago like a necklace of green jade around an azure ocean.

The welcome movement of air on the hilltop is lost as we stumble down loose gravel into a gloomy forest where creepers thicker than ropes drape from boughs and delicate white and yellow Frangipani blooms perfume the still air. In the distance, a family of Macaque Monkeys are squabbling amongst the long grass. An old male screeches trying to restrain boisterous young ones, his bared teeth framed by wrinkled brown skin fringed with a downy white beard.

Trudging back to our ship, a huge dragon emerges from the mangroves, raises himself up on his forelegs, bares his curving claws, and snorts a fearsome hissing sound. He flashes his long forked tongue as he menacingly sways his head from side to side.

We freeze: scared stiff: too petrified to even raise a camera. Our two Rangers step forward lowering their flimsy bamboo poles. The dragon stands tall, arches his neck, and belches a second bloodcurdling hiss. No one moves - or breathes. Seconds tick by in a terrifying standoff. Then, with a snort and a shrug, the creature lowers his head and slowly turns away to waddle back into the mangroves no doubt satisfied he has asserted his authority by giving these impertinent intruders a heart stopping fright.

Back on board the Katharina, over a tasty buffet lunch lively chatter relives our encounter with that fearsome Komodo Dragon on Rinca Island. Cameras are passed around sharing images less confronting on an LED screen than in real life when sharp claws and slimy poisonous teeth were only two steps and a spring away. Appropriately, the fruit salad served for dessert contains a melon known locally as ‘Dragon Fruit’. I feel a little unsettled, thinking of our scary standoff, when I sink my teeth into the fleshy fruit and blood red juice runs down my lips and drips onto the deck.

My thanks go to Captain Iwan, Guide Eva, Purser Frans, Dive Leader Haris, Chef Yulin, and all the helpful and happy crew members of the Katharina for a truly outstanding adventure. 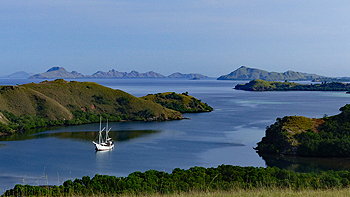