‘Happy Birthday darling,’ says Sally handing me the key to a Jaguar E-type. Momentarily I am stunned at my wife’s extravagance: then overcome with excited anticipation. Even standing still in the showroom the low slung 1971, primrose yellow, series III, 2+2 coupe with sparkling chrome wheels looks fast. I can’t wait to slide into the driver’s seat to take this legendary sports-car for a spin along the winding roads of the Yorkshire Dales.

The Jaguar E-Type inherited its sleek looks and a racing pedigree from the company’s D-Types which finished first, second, third, and fourth in the 1957 Le Mans 24 Hour endurance race. Launched at the 1961 Geneva Motor Show the E-Type caused a sensation with Enzo Ferrari stating it was “The most beautiful car ever made.”

Sliding into the driver’s seat is a bit of a contortion over the wide sill. Once inside; wedged in the leather bucket seat, with legs stretched out straight, and elbows bent behind a large upright steering wheel, space is limited. The massive twelve-cylinder engine and bulky four speed manual gearbox encroach some way into the snug cockpit. Oversized speedometer and rev-counter with white lettering on large black dials are positioned directly in front of me, and a black crackle-finish dashboard stretches out towards the passenger carrying more instrument dials and a line of toggle switches. No electronic climate controls in this seventies model, just a cumbersome chrome knob to regulate a heater valve and two stiff metal levers to prop open air vents. 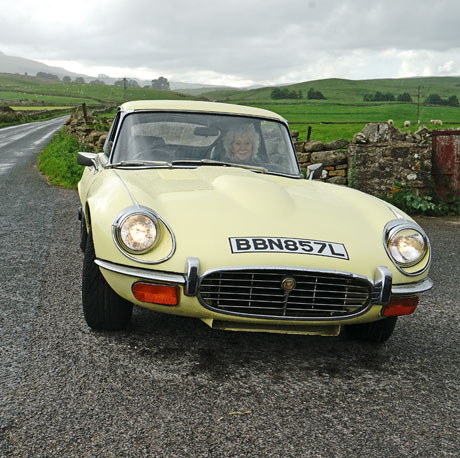 On a turn of the key the 5.3 litre engine shakes itself and bursts into life with an unmistakable impatient burble of twelve cylinders. I shove the long-travel clutch pedal, toss the short-throw gearstick, and then, ever so gently, press the accelerator to roll gingerly out of the showroom. The E-Type’s pressed steel bodywork weighs heavy on the car’s firm suspension as it thumps over uneven cobblestones in the dealer’s courtyard. Trying the brakes reminds me this 40-year-old classic does not have the stopping power of a modern sports-car. Allowing generous braking distances will be essential to avoid crashing and crumpling the E-Type’s extremely expensive curvaceous panels.

I inch the Jaguar’s overlong bonnet out into Keighley’s busy morning rush hour. Judging the tip of its protruding snout or butt of the tapering tail is pure guesswork. As we creep along in the nearside lane I am looking into wheel arches of buses and under trucks, re-emphasising how low this E-Type is. Hopefully the bright yellow paintwork will ensure we will not be overlooked and inadvertently crushed.

After a few miles I’m getting use to the heavy steering, allowing for progressive braking, and mastering smooth clutch take-up: already feeling in control of this long, low, and extremely potent sports-car. Soon I’m confidently threading through city traffic and picking up speed on the A629 heading for Skipton. Then, rushing on through Settle, to leave congestion and habitation behind and escape into the Yorkshire Dales National Park. There over thousands of acres of rolling windswept moors crossed by hundreds of miles of lonely roads I unleash this Jaguar and let it run free.

Out on the open road the E-Type soon demonstrates why this car is such a legend; ferocious acceleration, precise steering, tenacious roadholding. This car is as quick and agile as a cat (well it is a Jaguar). It just flies; swinging around bends, charging up hills, diving into dips as twelve cylinders whine and howl through twin fish-tail exhausts that bellow like cathedral organ pipes.

The two-lane track snaking up Ribblehead is deserted and drying after a light morning shower. I tramp on the ‘organ pedal’ and spin the large wood-trimmed wheel as we career along between low stone walls racing over hillsides of coarse green grasses, stunted heather, and yellowing ferns. Sally clutches the dash grab handle with one hand while trying to steady her smart-phone in the other to shoot a video. 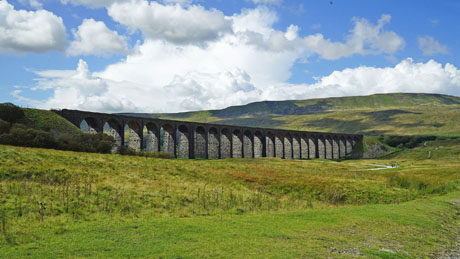 After an hour of exuberant driving Ribblehead railway viaduct comes into view — 440 yards long, 24 Arches, 104 feet high, built with over 1.5 million bricks — an impressive feat of engineering completed in 1875. It is still in use today bearing seven trains a day on the busy Leeds to Carlisle line. Sally and I hike along a rough trail to get a better look at this remarkable structure that has become an attraction for railway enthusiasts and tourists alike, especially when “The Dalesman” steam train chugs across billowing great white clouds of steam and soot.

‘Would thee like a chunk o’ cheese whith thart? It’s Wensleydale,’ asks the lass behind the counter in Ribblehead Railway’s Tea Rooms in an almost incomprehensible Yorkshire accent. She explains eating cheese with fruitcake is a local tradition. Surprisingly, tastes of crumbly, tart cheese and sticky, sweet fruitcake complement each other well.

The E-Type has gathered a few admirers when we return to the station carpark. I entertain them by departing with wheels spraying gravel and a low-slung exhaust pipe scraping over a protruding rock creating a shower of sparks. 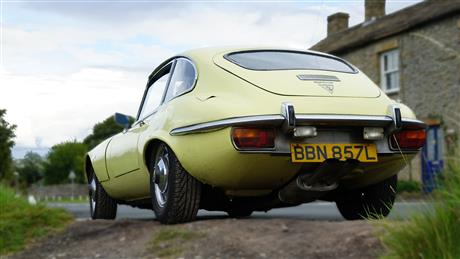 Heading for Hawes, ducking and weaving over undulating dales, we thunder past startled sheep grazing on roadside grass, speed past squat stone farm buildings tucked into the folds of a hill, and fly through the isolated hamlet of Bainbridge where I’m sure the Rose and Crown pub’s colourful flower baskets swing in our slip-stream.

Testing the car’s capabilities with every mile I am learning that a timid, tentative driving style is inappropriate: this race winner in street clothing demands to be driven with fearless vigour. Flick through the close ratio gearbox, lever the V12 engine’s tremendous 304 lbft torque, then spin the rev’s up its endless power curve and you’ll sprint down straights like a drag car. A firm push (or occasionally a desperate heave) on the brakes, drift into a bend, a purposeful tug on the wheel, then boot the accelerator and you’ll be swung around curves like a sample in a laboratory centrifuge.

Keep vigilant though. If you hit a pothole when cornering hard be ready for a hop, skip, and a twitch of oversteer. And when unleashing over 270 bhp of brutal power watch for damp patches of tarmac under shady overhangs that are sure to set rear wheels spinning. However, these minor digressions are all controllable, quickly recovered, and only add to the driving fun. 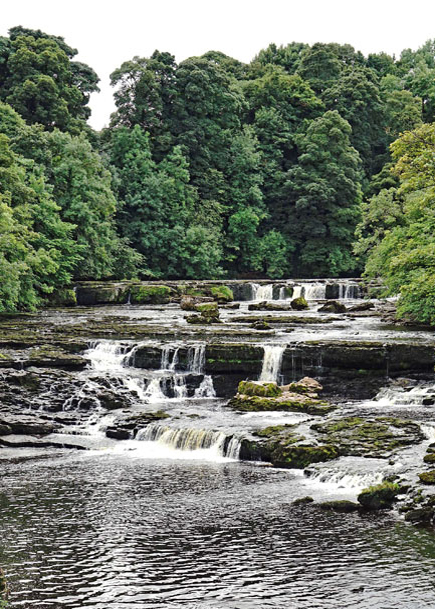 Approaching Aysgarth, I slow down to turn into a leafy lane and park beside St Andrew’s 15th century church. Sally and I then walk down a steep path to where the Ure River cascades down a staircase of rock ledges. The picturesque Aysgarth Falls seem to emerge spontaneously from dense woodlands that fill a sheltered cleft in the hills; clear water flooding out across broad shelves of exposed rock, tumbling over slab after slab, then reforming into foaming white water rapids that rush on down a narrow valley towards the sea.

Nestled beside these fast flowing rapids is a jumble of two and three storey old mill buildings now converted into a café and craft gallery. I tuck into a hefty wedge of home-made rhubarb and apple pie while Sally browses displays of colourful pottery and chintzy embroidery.

Later, turning homeward the E-Type’s mighty engine barely exceeds tick-over as we roll down from heather clad hills, past Akebar’s patchwork of neat cultivated fields, wind through crooked streets of Ripon, then take a final swing in the lingering twilight along a quiet byway around Ilkley Moor, to return to the showroom in Keighley.

I am reluctant to hand the E-Type key back to Richard Hall at Classic Car Hire North. I am seriously considering offering to buy the car and ship it back home to Australia. That fantasy soon fades. However, fond memories of unleashing a Jaguar on the Yorkshire Dales will certainly stay with me. As they say in Yorkshire, “it ware a reet grand day out.”