The helicopter flies towards a white dot that is the Kimberley Quest swinging at anchor in Crocodile Creek. . .

The helicopter banks as it circles a hill then dips to fly down a narrow gorge towards a white dot of a ship swinging at anchor in Porosus Creek; a shallow estuary named for the Crocodylus porosus, the salt-water crocodiles that infest the surrounding mangrove swamps. Shedding speed and losing height the aircraft cautiously approaches a ‘H’ painted on the wheelhouse roof. A blustery breeze buffets the helicopter, blowing it sideways: a surging tide swings the ship, straining its anchor chain. Expertly judging the contrary shifts, the pilot adjusts his trajectory, momentarily hovers, then deftly lands with a gentle thump. My 1,300 kilometre journey to the wild Kimberley region of North Western Australia is at an end. 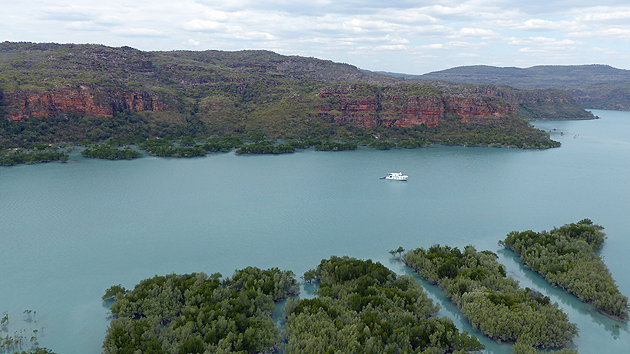 I have flown three hours by commercial jet from Perth to the cosmopolitan pearling centre of Broome; a further two hours by chartered turbo-prop to an isolated dirt strip bulldozed from the tropical scrub on the Mitchel Plateau; and then another hour in a five-seat helicopter over rugged coastal ranges to reach the Prince Regent National Park, 6,338 square kilometres of uninhabited, untamed wilderness of awesome beauty.

A vast, rugged beauty first revealed flying over endless outback plains of stunted trees and coarse grasses arching to a curved horizon; then on past the majestic Mitchell Falls cascading over great cracks in the earth’s crust; along the shining Roe River lazily snaking through a tangle of tropical rainforest; towards a ragged coastline of bays and beaches gnawed away by ten-metre tides; and beyond to where the broken edge of Australia becomes a vivid mosaic of lush green islands scattered across a turquoise Timor Sea.

On the helideck a smiling hostess greets me offering a chilled fruit cocktail, and then leads me below to a comfortable air-conditioned cabin. While unpacking I hear again the beating of rotor blades as three more ‘copters make the precarious landing, disgorge passengers, and then soar back into the clear blue sky.

After lunch we tumble into three aluminium tenders to explore the Hunter River. Ninety horse-power Honda outboard motors skim the craft over the fast flowing water, swerving around banks of slimy grey silt, flying past impenetrable swamps of mangrove trees that stand on stilt-like roots, and racing between colourful canyon walls layered with rust red hematite, ochre sandstone, and streaks of off-white silica laid down eons ago. 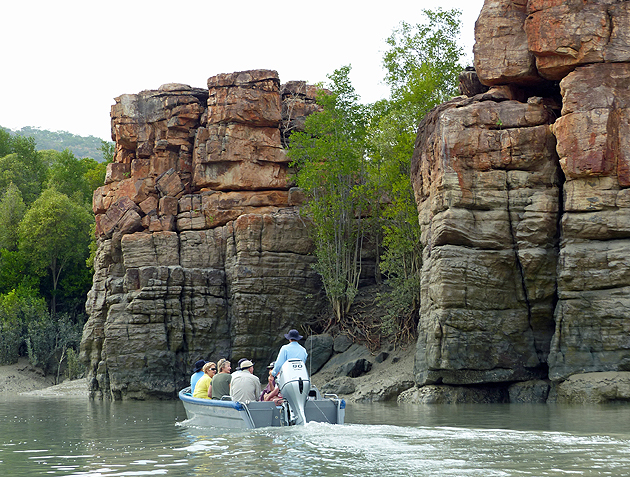 Our three coxswains scan the river alert and wary as Kimberley rivers are a navigator’s nightmare ─ a confusing maze of twisting tributaries, shallow shoals, and submerged snags, flushed by strong tidal currents that can sweep a boat off course. Fortunately, our boatmen have intimate knowledge of this river and an uncanny ability to read its swirling water for potential hazards.

Wildlife abounds along the banks. A splendid young wedged-tailed eagle with glistening bronze plumage cocks his curving beak at the passing intruders. Two dazzling white bellied sea-eagles roost in a Kimberley white gum, fluttering from bough to bough undecided where to settle. An osprey folds his two-metre wings to sink into a tall nest of tangled sticks high on a rocky ledge.

Salt-water crocodiles slither out of the water to sun themselves on the mud flats. These menacing prehistoric creatures are the earth’s largest living reptile. Their armoured scales flash in the sun as spiky tails lazily swing from side to side. A great 200 kilogram specimen lies with its long mouth open flashing fearsome rows of sharp teeth. Are they just lazing or lying in wait? Crocs’ are known to be intelligent hunters who study the daily patterns of their prey, then lurk for hours semi-submerged and motionless ready to spring a deadly ambush. 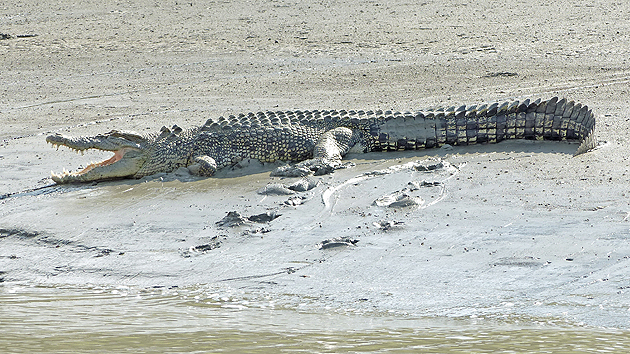 Up the river the colourful cliffs close in, their sheer walls split into great square blocks of rock that look unstable, ready to fall. Spindly trees sprout from between the cracks growing out horizontally before turning up towards the sunlight. Sheltered from the sea breeze, the sour smell of coconut laurel drifts from trees lining the banks to hang in the still, moist, air.

Engines slow, then stop to drift on the current into a calm backwater as our expert guide points out an Aboriginal painting in an alcove high above the water. Dark stick figures dance, hand in hand, across the rusty red rock. In the foreground a kangaroo lies on its back. Does this scene depict a celebration of a successful hunt or a sacrificial religious ceremony? We will never know for sure as the artist died over 30,000 years ago. His distant descendants, the elders of the Worora people, are now custodians of his land. 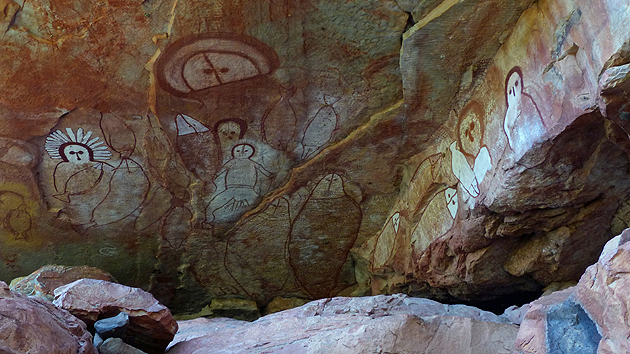 Engines restart, the lead tender curves a graceful arch across the water turning back towards the ship.

A thrashing of water. Slinging of mud. A fearsome fight erupts on the far shore. A 300 kilogram crocodile is tossing his head shaking the life out of a two metre croc’ caught in his crushing jaws. He rises up, fore feet clear of the mud violently throwing the doomed creature from side to side. The pair crash down splattering spray in all directions. The trapped croc’ desperately twists and turns vainly trying to flog his oversized opponent in his flaying tail. It is an impossible miss-match; the mighty heavyweight beats the poor welterweight creature senseless on the bank. Invincible, the victor turns with a swish of his two metre tail, slides down the bank dragging his now lifeless victim, and silently submerges below the murky water leaving only a string of bubbles.

Was the fight a territorial dispute? Rivalry for a mate? Or just an opportune meal? It could be any of the above - Croc’s don’t care: they eat their own.

Welcome to the wild Kimberley

To see more of the magnificent wild Kimberley click on the ‘Photographs’ tab above, then select ‘Landscape’ and then ‘Wildlife’ on the menu sidebars of the photo gallery page.

My thanks go to my knowledgeable guide, Tim Willing and the crew of the Kimberley Quest; Skipper Brad, coxswains Brent and Joe, hostesses Riss’ and Emma, and to Shaun the fantastic chef all of whom contributed to a truly memorable adventure. 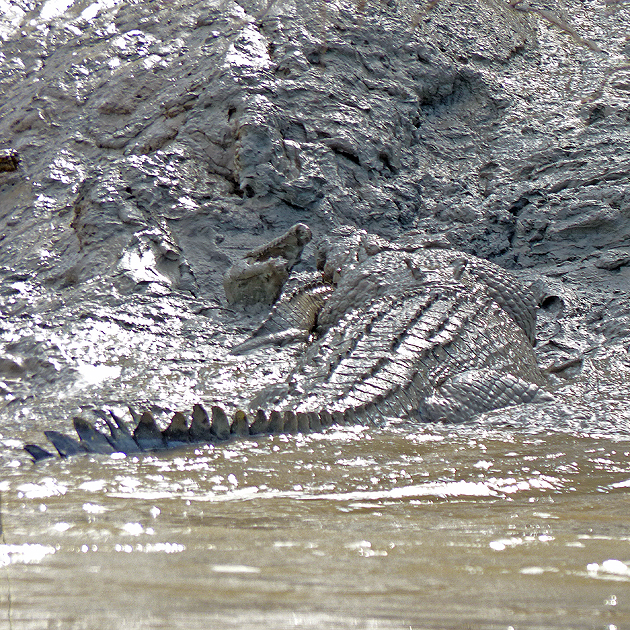